The bullish rally in the CAD/JPY pair bolstered the exchange rate by 400 pips to 79.60 in a matter of one month. The Canadian dollar strengthened mainly due to the OPEC’s decision to limit the production of oil to a range of 32.5 million to 33 million barrels. The Bank of Japan’s decision to maintain the long-term yield near zero also assisted in keeping the Yen weak against the Canadian dollar. For a multitude of reasons mentioned below, we anticipate a short-term trend reversal in the CAD/JPY pair.

Last Wednesday, the Bank of Canada slashed its growth outlook for the economy, while keeping the benchmark interest rate unchanged at 0.5%. The central bank now anticipates the Canadian economy to register a growth of 1.1% in 2016, compared to the 1.3% growth outlook issued in July.

While welcoming the measures taken by the government to stabilize the Canadian housing market, the Bank of Canada’s governor Stephen Poloz cautioned that the new mortgage rules would trim the economic growth by 0.3% in 2018. Poloz now anticipates the Canada’s economy to expand by only 2% in 2017 and 2018. Previously, the central bank had forecasted a GDP growth of 2.2% in 2017.

Poloz also acknowledged that the central bank came close to cutting the interest rates, considering the economic slowdown. However, the uncertainty created by the new mortgage rules forced the central bank to differ the idea at the last moment.

The minutes of the September 20-21 FOMC (Federal Open Market Committee) meeting reveals that the US Fed now anticipates the US GDP to grow between 1.7% and 1.9%, from the June estimates of 1.9% and 2.0%. Ed Wijaranakula, the analyst at NMS Investment Research, believes that the US Fed may postpone the rate hike once again.

Such views would support the strengthening of the Yen. Thus, considering the above facts, we anticipate the CAD/JPY pair to decline in the days ahead.

The CAD/JPY pair has begun to decline after failing to break above the established resistance at 78.80. The negative reading of the MACD indicator denotes weakness in the currency pair. Thus, we can anticipate a downtrend in the asset. 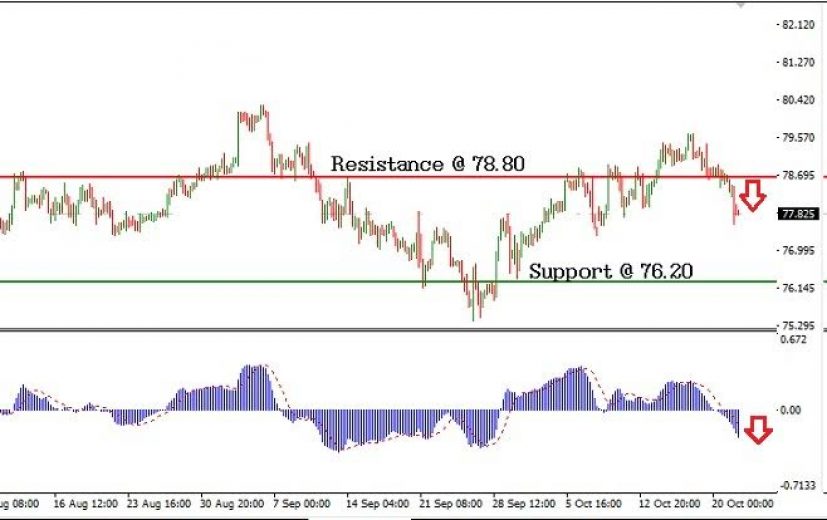 So, a currency trader can consider going short under the current circumstances. The entry level can be near 78.40, while the stop loss order can be placed above 78.90. The short position can be covered when the CAD/JPY falls to about 76.40.

Investing in a one touch put option will enable a binary trader to realize returns of up to 90% from the forecasted downtrend in the CAD/JPY pair, The target level for the put option should be about 76.80, while the expiry date should fall in the third-week of November.

With just two months to go for the planned triggering of the Article 50 by the UK government, talks of

Tensions between North Korea and the US sparked a meltdown in the global financial markets during the past two weeks.