The Pound lost almost 17% against the Danish Krone in the past six months. Well, it does not need a high level of economic intelligence to guess the reason for the decline. Brexit, which has now become a lingua Franca among traders and analysts, is the precise reason for the downtrend in the GBPDKK (Pound-Danish Krone) currency pair.

Most research reports suggest that the UK’s economic growth would decline below 2% in 2016, if the UK leaves the European Union. So far, the steep fall in the exchange rate of the Pound indicates that the forex market has already priced in a substantial Brexit risk premium. So, a little unwinding of the risk premium can be expected. To stem further weakness in the Pound, the Bank of England (BoE) should explicitly chain its Dovish policy with the Brexit issue. However, it is a risk, which BoE is unlikely to take as it would seriously undermine the credibility of the Central bank as a financial institution.

On the other hand, Denmark is facing some lingering issues which need to be resolved at the earliest to prevent the economy from sagging. First of all, the gap between the rich and the poor is widening. According to the Economic Council of the labor movement, the rich people now control 80% of the country’s assets, up from 65% in 2000. The percentage of poor people doubled to 6% in the past two decades. The GDP growth outlook of Denmark was also slashed 0.1% last month to 1.3% in 2016.

The high tax rate of 56% in Denmark shuns students from taking engineering courses.

Furthermore, only 48% of the graduates take up jobs in the private sector. These issues are severely constraining the growth of private firms. Ultimately, it affects the overall growth of the economy. Thus, fundamentally, the GBPDKK pair is expected to strengthen in the near future.

The GBPDKK pair is in the process of forming an inverted head and shoulder pattern in the charts. The momentum is rising with a reading above 100. This indicates that the currency pair would soon rise upwards. A crossover above 9.6193 would take the currency pair to 9.8907 or even up to 10.1162. 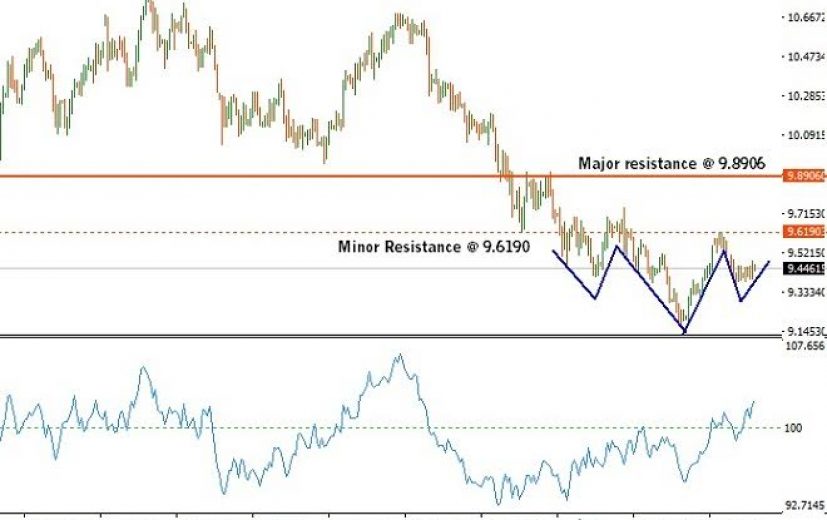 Thus, a forex trader should take a long position at the prevailing rate of 9.4460. To avoid huge losses, a trader should place a stop loss order below 9.3350. The profit can be booked near the next resistance at 9.89.

A one touch call option contract would suit a binary options trader in this scenario. For increasing the probability of success, a strike price of 9.55 or lower and an expiry date in the third week of June should be the obvious choice of the trader.

After rising considerably against most of the major currencies in the past two weeks, the pound opened on a soft