In our October 6 report, we had forecast a decline in the EUR/JPY pair and expressed our interest to go short near 132.60 levels. We had also mentioned our desire to invest in a put option to gain from the downtrend. As predicted, within a week, the EUR/JPY pair fell to a low of 131.40, thereby resulting in a profit from both the trades.

Now, the currency cross has again climbed back to 133 levels. We anticipate the uptrend to continue due to the arguments presented underneath.

On Thursday, the Japanese Ministry of Finance reported a decline in the trade surplus to ¥0.24 trillion in September, from a downwardly revised ¥0.37 trillion in August. Analysts had expected the trade balance to remain unchanged at ¥0.31 trillion. Exports increased 14.1% y-o-y, but less than the Consensus estimate of 14.9%, and lower than 18.1% rise posted in August. The exports slowed down for the first time in three months.

Ironically, the highest growth in almost four years was registered in August. The Ministry of Economy, Trade and Industry also reported a revised industrial production growth of 2% in September, a bit lower than 2.1% increase in industrial expansion expected by economists. The preliminary report indicated a growth of 2.1%. The September data reveal a slight slowdown in the Japanese economy.

According to Eurostat, the Eurozone trade balance increased to €21.6 billion in August, compared with a downwardly revised €17.90 billion in the earlier month, and higher than the market’s expectations of €20.3 billion. Similarly, the current account surplus increased to €33.30 billion in August, from €31.50 billion in July, and greater than analysts’ estimates of €26.20 billion. The current account data reflect the domestic and global demand for a currency. The demand for the Eurozone equities has more than doubled in the year ended August, investments rising from €134 billion to €333 billion. Thus, economic data support a EUR/JPY rally during the current week.

The EUR/JPY pair has broken the resistance at 133.10, as shown in the price chart below. Further, the currency pair has also formed a bullish hammer pattern. Additionally, the MACD histogram is making new highs. Thus, we can expect the current uptrend to continue. 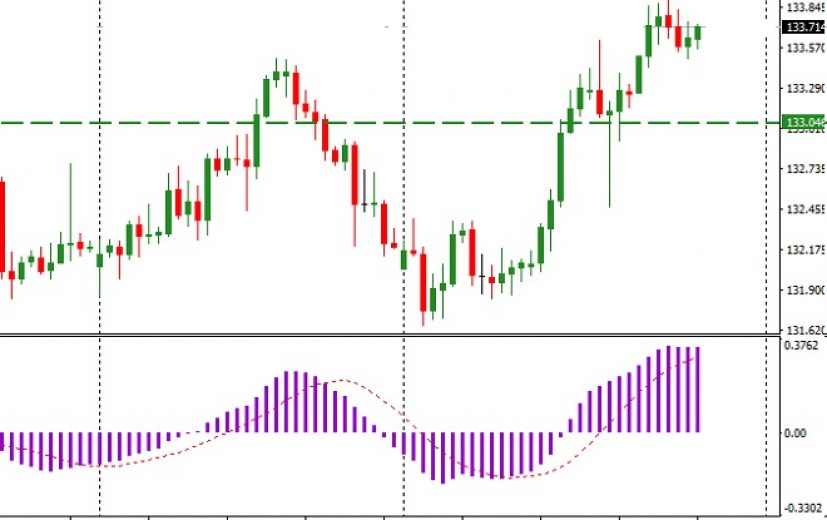 A high or above option may also be bought after opening a long position in the currency market, in order to increase returns. The trade will be taken when the pair changes hands near $133.60. Further, we wish the option contract to remain active for a week.