In our currency report dated October 27, we had predicted a decline in the EUR/NZD pair from the level of 1.7050. Further, we had also mentioned our interest to open a short position in the spot Forex market.

Other than that, we had also expressed our desire to invest in a put option. In line with our report, the currency pair fell to 1.6630 levels in a week. Correspondingly, we realized profit from both the trades.

The EUR/NZD pair has bounced back to 1.6890 levels in the past two trading sessions. We anticipate the uptrend to continue due to reasons given below.

The European officials are turning more and more optimistic about the Euro zone economy. The latest in that list is the European Central banker Benoit Coeure who said the Euro zone recovery is the strongest seen in 20 years. Coeure also pointed out that the Euro zone may record its fastest growth in a decade, if the European Commission’s upwardly revised GDP growth outlook of 2.2% is achieved in 2017. The previous estimates had pegged the growth at 1.7%.

Analyst Kit Juckes at Societe Generale has a similar bullish view of the Euro dollar. Juckes underscored the Eurozone’s current account surplus (exports are way higher than imports) to strengthen his argument. Since the goods are priced in the Euro, importers have to purchase the Euro dollars and that increases the value of the currency.

Another argument by Societe Generale in favour of the Euro is based on the principle of Purchasing Power Parity (PPP). By taking a basket of goods in one country and comparing its price in another currency, the value of a currency based on the PPP can be calculated. In case of the Euro, the PPP is higher than the market value. That indicates the Euro is undervalued. Sooner, the market will adjust itself to the valuation based on the PPP. So, a rally in the Euro can be expected.

In the New Zealand, finance minister Grant Robertson officially confirmed Tuesday that the RBNZ’s mandate will be changed to include unemployment rate. Further, the government also plans to strip down the powers of the RBNZ’s Governor in making policy decisions. The government of New Zealand prefers a policy setting committee to be set up for making interest rate decisions. Further, Robertson also prefers the minutes of the policy meetings to be published. The inclusion of unemployment rate in the RBNZ’s mandate has turned the currency bearish as the market believes that it will handicap the central bank’s ability to raise interest rates in line with other central banks in developed economies. Thus, we forecast a continuation of the EUR/NZD rally in the short-term.

The historic price chart indicates a strong support for the pair at 1.6790. Further, the RSI of moving average is in the bullish zone. The currency cross is also trading above its 50-period moving average. Thus, we expect a continuation of the uptrend. 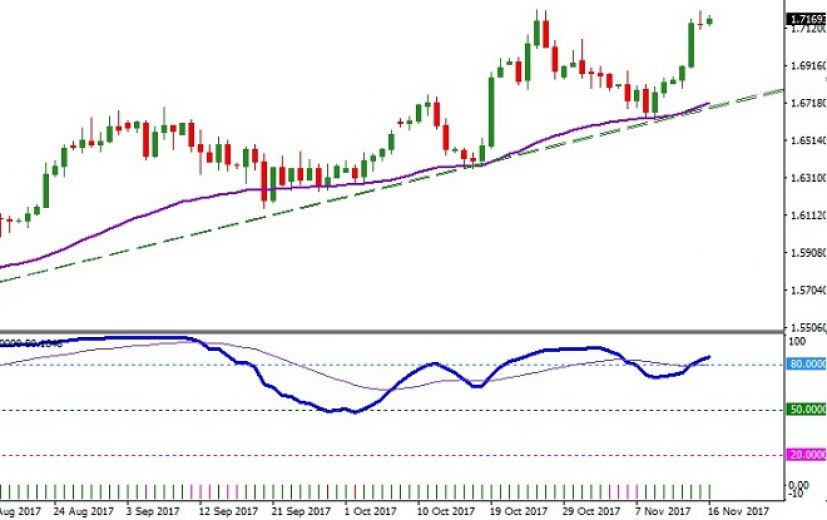 We may establish a long position in the EUR/NZD pair to capitalize on the uptrend. We prefer to open the long position near 1.7080, with a stop loss order below 1.6970. We will exit the trade when the currency pair reaches a level of 1.7340. Additionally, we intend to invest in a call option to increase returns. A strike price of about 1.7080 is preferred for the trade. We will also choose a date around November 23 for the expiry of the contract.