However, the Euro dollar has declined slightly to about 132.60 in the past few days, after Mario Draghi warned about a probable negative impact of a strong Euro dollar on the economy of the 28-member bloc. On the basis of the details given below, we expect the EUR/JPY pair to decline further.

The Eurozone unemployment rate was unchanged at 9.1% in August, compared with the previous month, but a notch higher 9% anticipated by analysts. The Eurostat data indicate that a lot more needs to be done for the Eurozone economy to get back to a stable growth track.

The Eurostat also reported a 0.5% m-o-m decline in August retail sales, compared with a 0.3% decline in the previous month. Economists had anticipated a 0.3% increase in retail sales.

The Catalan referendum and its outcome have sparked fears of a possible breakup of the Eurozone. Even though economists do not expect the situation to spill over to other countries in Europe, still, it is a warning sign of the challenge that may come up from separatist movements (or prosperous zones in the EU) in Europe, against the ECB’s decisions. While the Euro is weakened by economic and geopolitical developments, the Yen received a boost from the rising consumer confidence.

According to a data from the Cabinet Office of Japan, consumer confidence reading improved to 43.9 in September, from 43.3 in August, and better than analysts expectation of 43.5. Likewise, the gauge measuring employment increased to 47.8 from 47.4 in the earlier month. More importantly, the core inflation increased 0.6% y-o-y in August, up from a 0.4% gain in the previous month. It is the strongest gain since May 2016. Notably, the GDP of Japan has expanded for six consecutive quarters in a row. 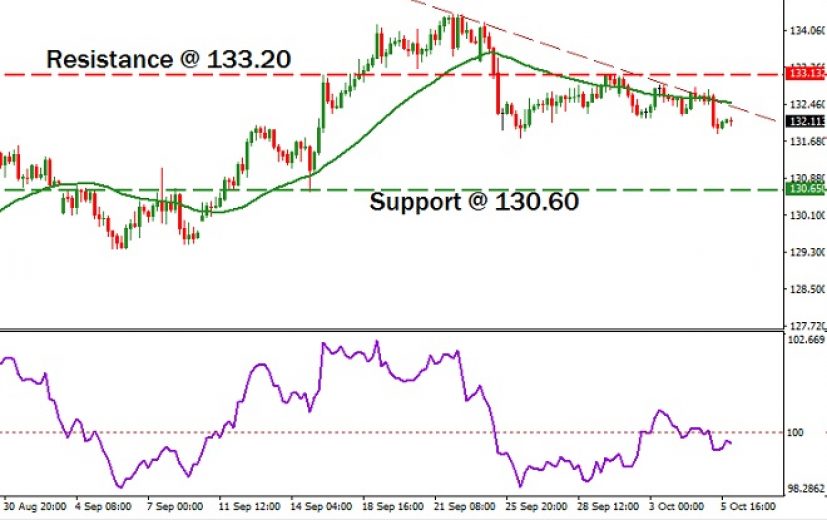 To benefit from the downtrend, we are looking at the prospects of opening a short position near 132.20. To achieve a risk-to- reward ratio of at least 1:2, we will place a stop loss order above 132.80. An order to book profit will be placed will be placed at 130.60 levels.

From one of our binary brokers, we may purchase a low or below option to gain from the current downtrend. The option should remain active for a period of one week. Finally, a strike price of about 132.60 would be ideal for the trade.