Strong employment data enabled the Aussie to reverse the downward trend against the Yen in the second week of September. A decline in the Japanese industrial production in July also supported the reversal.

Since September 14, the AUD/JPY pair has risen from a low of 1.4460 to a high or 1.4730. However, we anticipate an end to the AUD/JPY pair’s uptrend in the current week, due to the reasons given below.

Last Thursday, while speaking to an audience at the American Chamber of Commerce, Philip Lowe, governor of the Reserve Bank of Australia, stated that a rise in the global interest rates will not have any impact on the Australian economy in the short-term.

Echoing similar thoughts, Peter Dragiecevch, an analyst at Nomura, pointed out the negative effect of Fed’s hawkish stance and China’s credit downgrade by the S&P on the Australian dollar. China is a major trading partner of Australia. Thus, a decline in Chinese imports will have a negative effect on the Aussie. While economic data keeps the Aussie under pressure, geopolitical developments and lack of inflationary pressure in Japan is expected to push the Yen upwards.

On Friday, North Korea threatened to test another hydrogen bomb over the pacific ocean. The Yen, a safe haven currency, is expected to strengthen not because investors are worried about the possibility of a war. Instead, they are concerned about a possible decline in the sales of homes and vehicles across the globe due to a drop in consumer confidence. The Japanese Prime Minister Shinzo Abe came to power in 2012, with a promise of boosting inflation. However, the quantitative easing mechanism employed by the Bank of Japan is yet to result in a sustained rise in consumer prices.

Analysts at HSBC is of the opinion that the Yen would soon return to its fair value against the US dollar, as the strategy employed by Abe’s government has not yielded the necessary results. In such a case, the Yen would begin strengthening against the major currencies soon. Thus, on the basis of above discussed details, we forecast a decline in the AUD/JPY pair.

The AUD/JPY pair failed to break above the resistance level of 89.20, on Friday. The momentum indicator is making new lows below the zero level. On the downside, the next support exists only at 87.80. Thus, we can expect a decline in the currency pair. 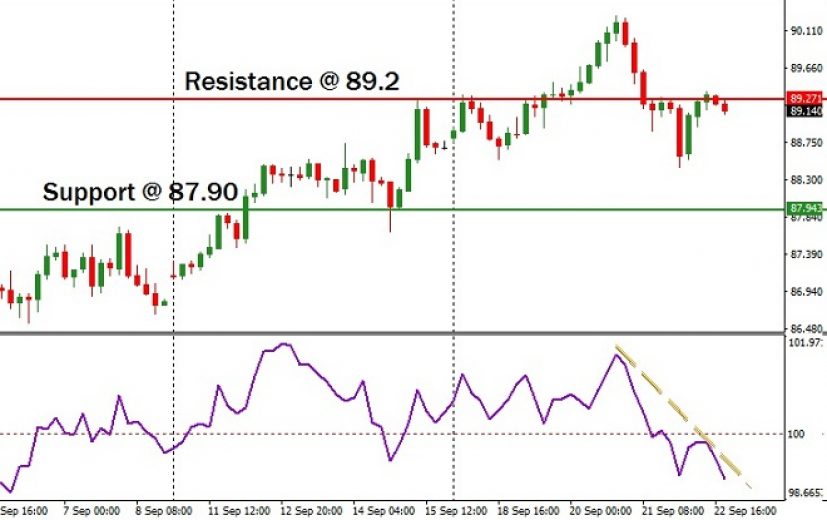 A short position may be opened by us in the currency market, to benefit from the downtrend. We will target an entry near 89.40, with a stop loss order above 90.40. The short position will be covered near 87.80.

Similarly, we may invest in a put option as well. The option should not expire before October 4th . Additionally, the currency pair should be trading near 89.40.

Pound turns bullish on anticipation of rate hike by BoE