From then on, the EURGBP has been on a gradual slide. Last week, the currency pair touched a one and a half month low of 0.7734.

A close look at the prevailing situation in Britain, Europe and US would reveal the future trend of the currency pair.

One of the main reasons for the strengthening of the Euro is the faster than expected economic recovery in the Euro zone. As per official data, the Euro zone’s economy grew at 0.6% in the first quarter of 2016, compared to 0.3% growth recorded in the previous quarter. The analysts had expected a 0.3% economic growth in the Euro zone.

The hesitation on the part of Fed to raise the interest rates also contributed to the rise of the Euro against the Pound. The Fed continues to say that there will be at least two rate increments this year. However, market participants believe that the rate cut would happen only when there are firm signs of economic recovery in the US. Finally, the negative sentiment on the British Pound, created by the Brexit issue, favored the rise of the Euro dollar.

However, there were some noticeable changes in the past week. The Dallas Federal Reserve President Robert Kaplan stated that the market is underestimating the probability of an early rate hike. According to Kaplan, if the second-quarter economic data is stronger, then rate hike is possible in June or July. The statement is expected to trigger short-covering in the US dollar. If that happens, the Euro would begin to decline against the US dollar as well as the Pound.

In Britain, more than 100 executives from the financial services sector have signed a letter calling for the withdrawal of Britain from the European Union. The letter, which includes signatures from hedge fund managers Crispin Odey and Paul Marshall, explicitly stated that getting out of the EU would only cement London’s status as the strongest competitor to New York, the financial nerve center of the world. With the referendum date nearby, the letter is only expected to strengthen the Pound. Thus, fundamentally, we can expect the EURGBP currency pair to decline further.

Last Friday, the EURGBP currency pair made an unsuccessful attempt to pierce the resistance at 0.7830. The currency pair is currently trading below the 50-day moving average. Furthermore, the momentum is currently declining and below 100. This indicates a further decline of the EURGBP pair. 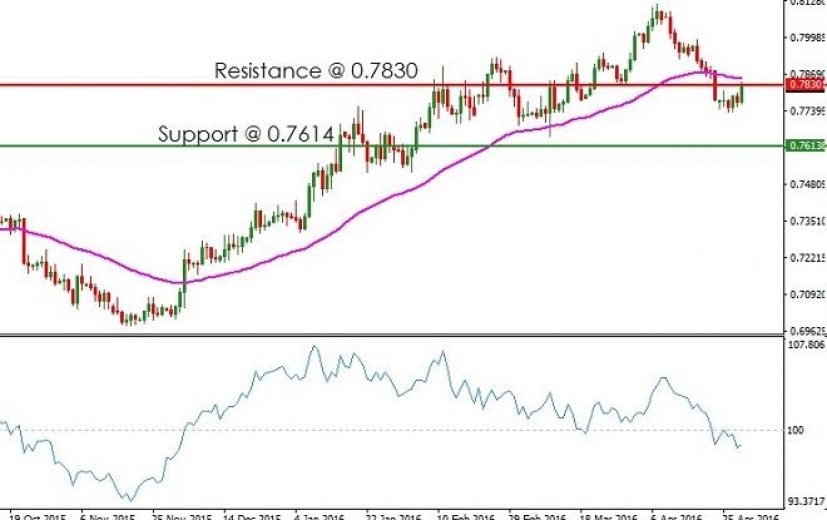 Thus, a currency trader should take a short position at the prevailing level. The stop loss order should be placed at least 100 pips above the resistance level. When the price starts declining, the profit should be booked near the next major support at 0.7605levels.

A binary option trader should purchase a one touch put option contract to benefit from the probable downtrend in the currency pair. Provided the expiry date is in the first week of June, a strike price of 0.7650 or above would ensure that the contract ends in the money.