On the basis of a strong rise in Japan’s trade surplus in July, we had forecast the Yen to strengthen against the Aussie, a commodity currency, in our August 21st report.

We had also indicated our willingness to open a short position in the AUD/JPY pair near 86.60, with a target of about 85.20. Furthermore, we had also expressed our desire to invest in a put option contract.

Within a week’s time, the pair declined as expected and led both the trades to profit. The AUD/JPY pair is now back at the 86.60 levels. We anticipate the pair to decline again due to reasons given below.

In Australia, the seasonally adjusted retail sales were relatively unchanged (0.0%) in July 2017. This follows a downwardly revised 0.2% growth in June and a rise of 0.6% in May 2017. Analysts had expected the retail sales to grow by at least 0.2% in July.

The Australian Bureau of Statistics stated that the trade surplus declined to A$460 million in July, from A$890 million in the earlier month. The reported figures were lower than analysts expectation of A$930 million. In trend terms, Australia had a surplus of A$768 million in July, down A$250 million from the surplus in June 2017.

Iron ore, which is one of the main export commodities of Australia, fell 3% to end at three week low of $73.70 last week. Most analysts are of the opinion that the price of the raw material for steel mill would remain between $60 and $80 for the rest of the year, and would start declining in the second-half of 2018.

The recent hydrogen bomb test by North Korea has reignited fears of a major war in the Korean peninsula. That has boosted the demand for safe haven currencies such as the Yen. The strong current account surplus reported by the Japanese Ministry of Finance also keeps the Yen stronger. In July, the current account surplus was ¥2.03 trillion, up from ¥1.52 trillion in June, and greater than ¥1.65 trillion expected by analysts. Thus, weak retail sales and a decline in the price of iron ore is expected to turn the Aussie weak against the Yen, which remains strong on a rise in demand for safe haven currencies and a strong current account surplus in July.

Technically, the MACD indicator has declined below the zero level. Additionally, the AUD/JPY pair is also facing resistance at 87.20. Thus, we can expect the current decline to continue. On the downside, the next major support exists at 85.80. 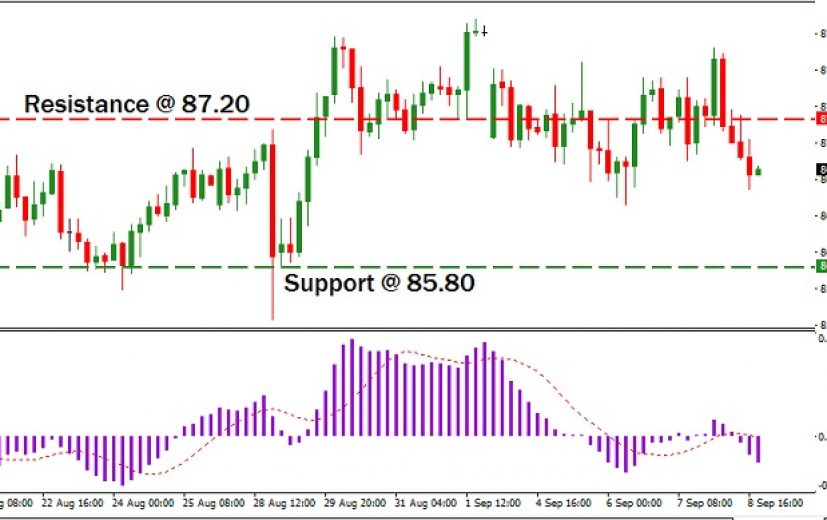 In the currency market, we are planning to open a short position near 87.20, with a stop loss order above 87.80. We hope to book profit near 85.80. Likewise, a put option may also be bought to increase the return from the analysis. We would be looking for a strike price of about 87.20 and a contract expiration date around September 19th .

After dipping to a historical low against most of the currencies in mid-October, the Pound started recovering in an unexpected