On 5th Aug, we had recommended taking a short position in the AUD/MXN pair at 14.40 levels with a target of 14.25 or even lower. For binary traders, we had suggested purchasing a one touch put option.

Furthermore, we had categorically mentioned that the target will be achieved in less than two weeks time. The currency pair moved precisely as we had predicted. All the support levels were broken and the currency pair hit a low of 13.9370, before closing at 13.9459 on Friday.

The marginal recovery in the price of crude oil also contributed to the strengthening of the Mexican Peso. However, we believe that the decline will be arrested in the coming weeks due to the reasons described below.

Invariably all the analysts believe that the last week’s increase in the price of crude oil to about $44 per barrel cannot last longer. The main reason for such a view is that the oil glut still remains, and demand is yet to pick up. The warning issued by the US authorities for travel to Europe is likely to create further decline in the demand for oil products.

Last week, both gasoline and heating oil spread was trading at $14 and $13.50 respectively. The prices were almost half of what it was a year ago. This indicates that the pressure on the price is here to stay for the rest of the year. Market participants believe that the price of crude oil would re-test the $30 levels soon. Such a scenario would certainly weaken the Peso.

In the case of Australia, Honglin Jiang, the analyst at Credit Suisse firmly believes that the RBA will not venture into another rate cut for the rest of the year. The opinion stems from the RBA’s acknowledgement that little is achieved through rate cuts. Thus, fundamentally, we can anticipate a reversal in the AUD/MXN pair. The stochastic indicator reflects an extremely oversold scenario in the AUD/MXN currency pair. 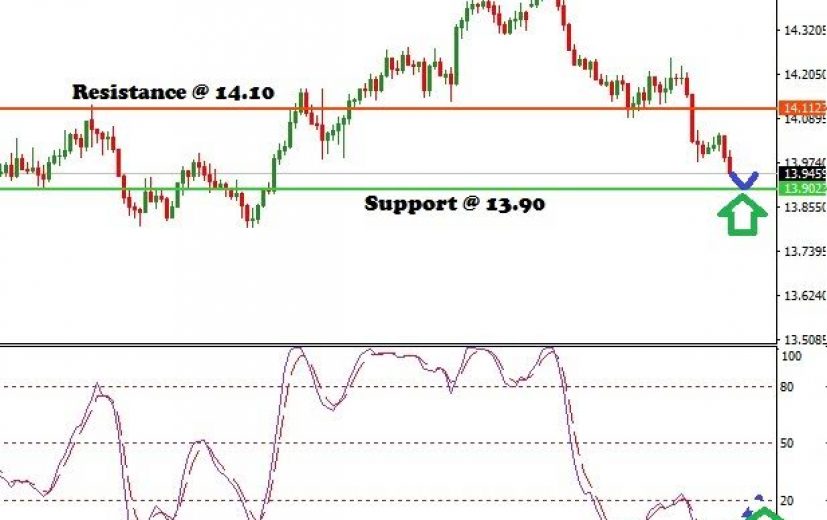 Thus, a long position can be taken in the AUD/MXN pair near the next major support level of 13.90. To prevent large losses, a stop loss order can be placed below 13.84. It is recommended to close the long position at 14.10.

A binary trader can trade a one touch call option to gain from the forecasted rise of the AUD/MXN pair. The strike price for the call option should be 14.05 or lower. Trader’s who are willing to take risk can purchase a ladder call option with 14.10 as the highest target price in the ladder. In both cases, the contract should be valid for at least four weeks time.

Lower than anticipated trade balance triggered a New Zealand dollar sell-off in the last week of June. The commodity currency