The Swiss Franc rose against all the major currencies earlier this week as investors rushed to exit from high-yielding assets such as the Australian dollar. The Swiss Franc’s rally began when US and North Korea exchanged fiery threats. As investors resorted to safe haven assets, the AUD/CHF pair fell from a high of 0.7740 to a low of 0.7580.

According to Shaun Osborne, chief currency strategist at Scotiabank, risk-aversion is the primary reason for the Swiss Franc to gain against other currencies at such a swift pace. However, fundamentals support a bullish reversal of the Australian dollar due to reasons given below.

According to the National Australia Bank Limited, business conditions and confidence improved considerably in July. The NAB Business Confidence reading rose to 12, from 8 in the previous month. It is the highest reading recorded in a decade.

The price of benchmark iron ore with 62% Fe content hit a four-month high of $76.10 per ton on Monday. Total volume of iron ore imported by China is set to cross 1 billion tons this year and exceed last year’s import volumes. The price of iron ore has gained about 20% in the past one month after falling to a low of $53 per ton. An increase in the price of iron ore, which is the biggest export revenue earner for Australia, would certainly have a positive impact on its currency.

Apart from strong economic data, historic price movement also favors a bullish reversal of the Australian dollar. According to Goldman Sachs, more often fading negative price movement would result in a profit than hedging, whenever geopolitical tensions escalate. The reason is that geopolitical tensions eventually lead to talks and ultimate settlement of the issue. So, on the basis of facts provided above, we forecast an upswing in the AUD/CHF pair.

The AUD/CHF pair has bounced off the support at 0.7575. A reversal is also indicated by the stochastic oscillator, which is moving in the oversold region. Thus, we can expect the currency pair to move upwards in the week ahead. 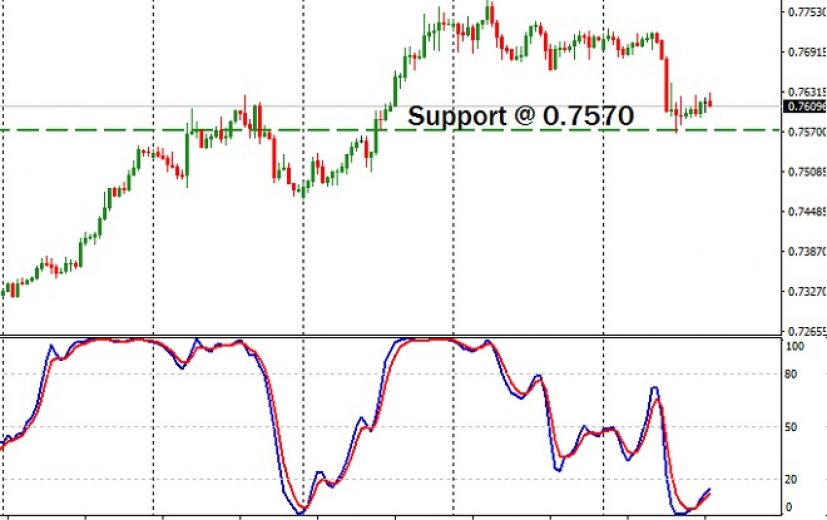 In the Forex market, we may create a long position in the AUD/CHF pair near 0.7580. To reduce risk, a stop loss order below 0.7460 is necessary for the trade. If the pair rises as anticipated, the long position would be sold near 0.7720.

To create a long position in the binary market, we will look at the possibility of purchasing a call option which expires not earlier than August 19th . The investment will be done when the pair trades near 0.7580 in the spot market.