Beginning the last week of April, we were repeatedly (pls., go through our reports on GBPCAD and GBPDKK pairs) saying that Pound would spike at any time considering the high Brexit risk premium and oversold scenario.

We had given a recommendation to purchase a one touch call option contract in all cases with expiry in the last week of May or in the first week of June. All the targets were hit this week.

The GBPMXN is yet another currency pair, which saw a steep uptrend on Wednesday.

Considering the positive economic scenario in Mexico and the steep rise in the GBPMXN pair, we now believe that the currency pair will cool down in the coming days. The following facts lay the foundation for our argument.

In spite of a decline in the price of crude oil, which constitutes about 6% of Mexico’s GDP, the country recorded a modest growth of 2.5% in 2015. In the first-quarter of 2016, the Mexican economy surprised everyone by registering an economic growth of 2.7%. The growth is really impressive considering the fact that the decline in the price of oil has eaten away 2% of GDP growth in the past year. The country is now expected to record a GDP growth of 3% in 2016.

Similarly, the public sector pulled out a surprise by meeting the deficit target in 2015. They are expected to repeat this performance again this year. The income tax revenue has considerably increased due to the reform act brought in 2013. The increase in revenue now assists in balancing the revenue loss from the decline in the oil price.

In spite of difficult business environment, the unemployment rate has fallen to 3.7%, from 4.1% last year. Mexico continues to gain from its trade relationship with the USA. Thus, an economic recovery in the USA would further boost the economy of Mexico.

Furthermore, Mexico is a highly industrialized country, unlike Brazil and Venezuela, which are heavily dependent on oil. Additionally, Mexico sided with the US, when Brazil and Venezuela increased their partnership with China, which is reeling under the economic downturn.

The rise of the Pound should be considered temporary until Britain votes to stay within the EU. So, fundamentally, the uptrend should now be used to go short in the GBPMXN currency pair.

Technically, as the price action chart reveals, the GBPMXN currency pair is expected to face resistance at 27.35. The stochastic indicate a heavily overbought scenario. 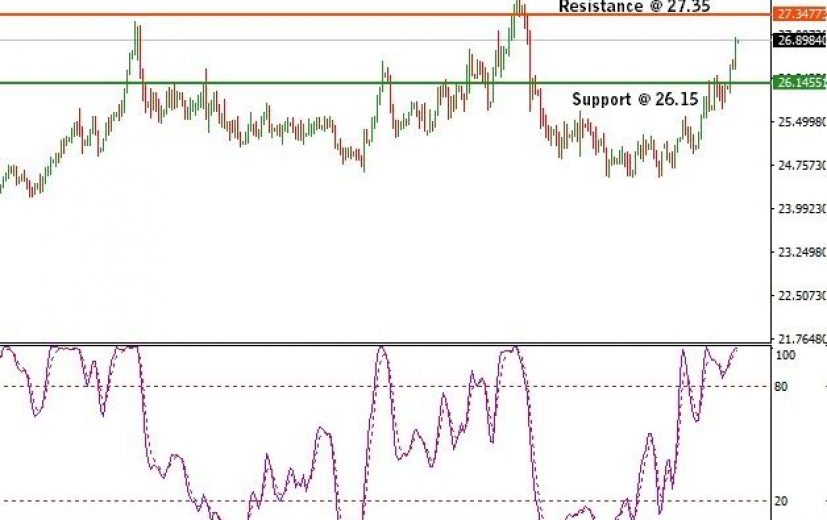 Thus, a currency trader should put his bet on a probable decline in the price by taking a short position between 27.25 and 27.50. To safeguard account from large losses, a stop loss order should be placed 150-200 pips above the short entry price. The recommended range for booking profit is 26.15-26.35.

A binary options trader should look for a broker offering one touch put options contract in the GBPMXN pair. A target price of about 26.50 would very well suit the trade. As we suggest normally, an expiry period of three to four weeks would benefit the trade.