The USD/JPY pair had been range bound for the most part of October. Tensions between North Korea and the US, the negative impact of hurricanes Harvey and Irma and mixed economic data from both Japan and the US kept the USD/JPY within a narrow range of 113.20 and 114.20.

However, we anticipate a short-term rally in the USD/JPY pair due to the facts presented underneath.

Last week, Trump picked Jerome Powell as the Chairman of the US Federal Reserve Board. Powell, a career central banker, is widely expected to follow the footsteps of Janet Yellen and gradually normalize interest rates.

The market was expecting Trump to announce hawkish John Taylor, a Stanford professor, as the Fed Chairman. The disappointment drove the US dollar downwards. However, there are reports that Trump would announce Taylor as the vice-chairman of the Federal Reserve Board. Thu Lan Nguyen, an analyst at Commerzbank, believes that it would have a significant positive impact on the Greenback as Taylor would definitely support frequent rate hikes.

Further, Republicans in Congress are always in support of a rule-based monetary policy, which Taylor is anticipated to adopt. Thus, Trump will not have much of an opposition from the Senate. In return, Republicans may cast a vote in favor of the US Tax reform plan. That would be a win-win situation for Trump and the Republicans in Congress. Since the vice chair would be announced soon, the market is expected to follow the adage “buy the rumor sell the news”.

In Japan, the overall bank lending rose 2.8% in October, but fell short of analysts forecasts of 3%. According to the Bank of Japan, lending by trusts and banks, put together, increased to 518.090 trillion Yen in October. The figures reported on Thursday last week also carried a downward revision of the September lending data to 2.9%, from the prior 3%.

The H4 price chart indicates a strong support for the USD/JPY pair at 113.15. The RSI of moving average is in the oversold region. Thus, we can expect a rally to begin soon. On the upside, the next major resistance for the currency pair is expected at about 115.50. 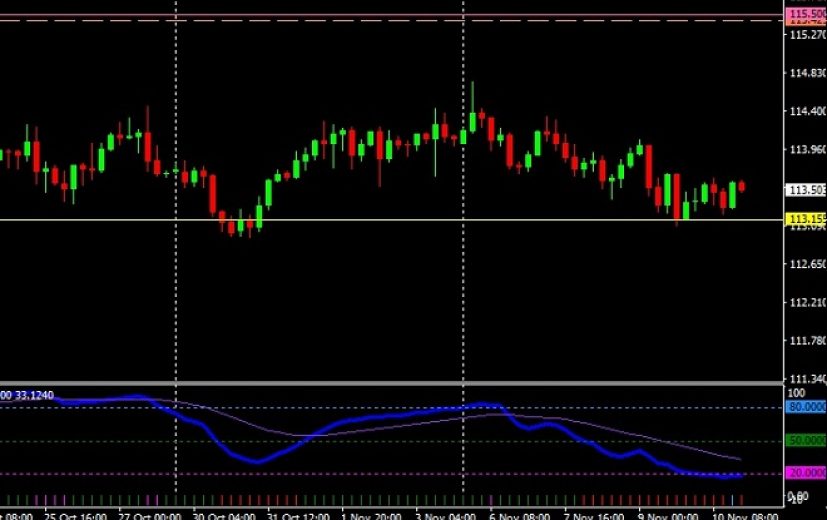 In order to gain from the probable rally in the USD/JPY pair, we may open a long position in the spot Forex market. We prefer an entry near 113.20, with a stop loss order below 112.10. The long position will be sold when the pair rises to 115.50.

Additionally, we may also invest in a call option to achieve higher returns from the analysis. A strike price of about 113.20 is preferred for the trade. Further, an expiry date around November 21 will be selected for increasing the probability of success.

On 5th Aug, we had recommended taking a short position in the AUD/MXN pair at 14.40 levels with a target