The exceptional manufacturing PMI reading of 56.9, reported earlier this month by the UK Office for National Statistics, propelled the Pound against the Greenback and other G10 currencies.

The US dollar was also turned weaker by the nuclear test conducted by the North Korean regime. The GBP/USD pair, which is currently trading at 1.3180 levels, is expected to rally further due to reasons given below.

On Tuesday, the UK Office for National Statistics announced that consumer price inflation (CPI) increased at an annual rate of 2.9% in August, an increase from 2.6% reported in the previous month.

The rate of increase was higher than 2.8% anticipated by analysts. A steep rise in clothing and motor fuel prices were mainly responsible for the increase in the inflation rate. Excluding food, tobacco, energy, and other volatile items, the core CPI increased 2.7% y-o-y in August, versus 2.5% anticipated by analysts. In the July, the core CPI increased 2.4%.

Economists at Berenberg and MUFG is of the opinion that a rate hike is possible during the months ahead. The argument is based on the sharp rise in inflation rate closer to 3%, which the Bank of England will not tolerate. The BoE had recently stated that interest rates must go up soon, despite moderate economic growth, in order to curb inflation.

Firstly, the market is not willing to price another rate hike this year. Even if the Fed hikes the benchmark rate in December, still, the question that arises in the mind of traders is what will happen next? The US President Donald Trump is expected to replace many of the members of the rate setting committee (FOMC) in 2018. As Trump is in favor of a weak US dollar that would boost exports, the market believes that the Fed will aggressively resist rate hikes in 2018.

Secondly, Deutsche bank analysts believe that the currency market is no longer driven by interest rate expectations, but an adjustment to flow imbalances that have arisen from unconventional monetary policy implemented in the aftermath of the 2008 crisis. Thus, the US investors who have liquidated their overseas portfolio after the financial crisis are expected to re-allocate funds to other markets. Thus, an anticipation of hawkish stance by the BoE and weak outlook for the US dollar is expected to keep the GBP/USD pair in an uptrend in the short-term.

Technically, the GBP/USD pair has formed a rounded-bottom pattern as shown in the image below. The stochastic oscillator is also in the bullish zone. Theoretically, an extension equaling the depth of the pattern, from the neck, would give us the target level in a rounded-bottom pattern (AB=CD). Thus, we can expect the current rally to take the pair to a level of 1.3600. 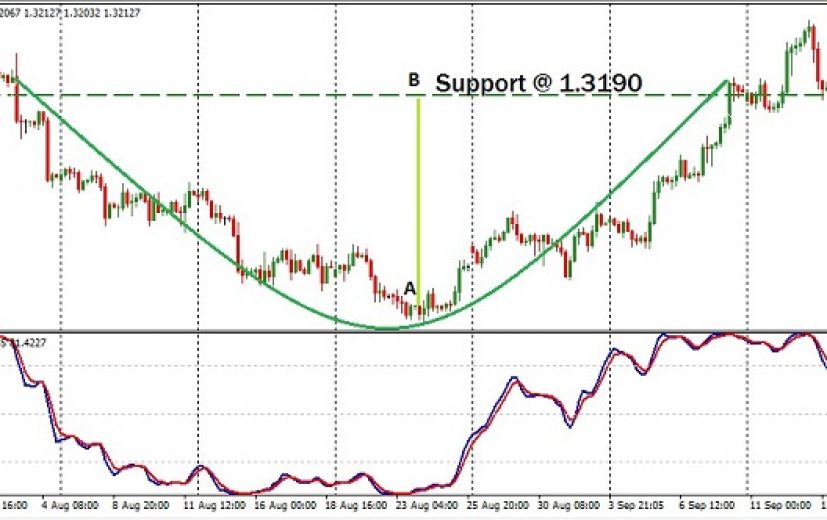 We would like to benefit from the probable uptrend by opening a long position in the currency pair near 1.3180. To minimize risk, a stop loss order would be placed below 1.3080. The long position would be sold near 1.3440.

A similar trade may be established by investing in a call option offered by a binary broker. The entry is preferred near 1.3180, while the choice of expiration date is around September 22nd.