Both Canada and Mexico are commodity based economies. Mexico has the world’s largest reserves of silver and stands tenth in oil reserves. Likewise, Canada stands third among the countries with proven oil reserves. In spite of these similarities, the Canadian dollar had strengthened considerably against the Mexican Peso in the past one year.

The CADMXN (Canadian dollar – Mexican Peso) currency pair touched a high of 13.89205 in February 2016, from a low of 11.86722 in April 2015. To decide whether the CADMXN currency pair would move up further or see a trend reversal, a study of the fundamentals of both the countries is a must.

During the fourth-quarter of 2015, the Mexican economy grew 0.5% against the analysts’ expectation of 0.6%. But for an expansion of 0.9% in services, the economy would be in a much worse shape. In March, the seasonally adjusted consumer confidence index declined to 89.6, which is the lowest recorded reading since August 2014.

In view of the difficult economic scenario, the Mexican government has trimmed down its guidance for 2016 as evident from the medium term fiscal and macro policy making guidelines (Criterios Generales de Política Económica 2016 or CGPE16).

The fiscal reforms undertaken in 2013-2014 have started showing positive effects on the economy. According to the CGPE16, the non-oil tax revenues have increased from 9.7% in 2012 to 10.5% in 2014. The reforms also led to an increase in the income tax receipts. Barring the special tax on Gasoline, in 2015, the tax receipt is expected to touch a high of 12.7% of GDP. Still, it will not be able to balance the revenue loss from the decline in the price of crude oil. The CGPE16 expects the debt to be 47.8% of GDP in 2016-17. Again, considering the past history, it can be only considered as too optimistic projection.

On the other hand, economic data from Canada seems to indicate that a firm recovery is on the horizon. Around 40,600 jobs were created in March, beating analysts’ expectations of 10,000. The unemployment rate fell to the lowest since December and stood at 7.1%. Thus, the Canadian dollar continues to strengthen against the Mexican Peso.

Technically, the stock currently trades few notches above the major support zone defined by the lower and upper boundaries at 13.20 and 13.45. The chart also shows a bullish shark harmonic pattern. 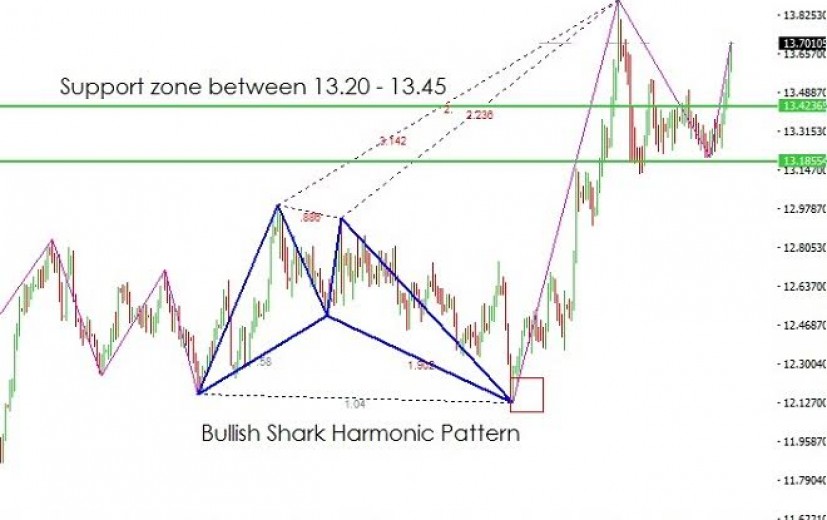 Thus, a canadian forex trader should take a long position at the current level with stop loss below 13.15. The profit can be booked near 14.70 levels. A binary options trader should purchase a one touch call option contract with expiry in mid-May. The target level or strike price for the one touch call option contract should be preferably $14.00 or lower.