There was hardly any kind of impact on the EUR/RUB currency pair, so far, following the Britain’s exit from the EU. While the market was expecting the currency pair to remain bullish or at least range bound, the recent developments in the Euro zone, Russia, and commodity markets have given a reason to believe that a trend reversal is on the horizon.

On Friday, the IMF slashed its Euro zone growth forecast for the next two years on concerns over uncertainties sown by the UK’s vote to exit the European Union. The institution warned that the situation could worsen in the coming months, if the overall situation does not improve.

In the case of Russia, there will be limited impact of Brexit on the economy. The economy is now expected to contract only by 0.9% in 2016, compared to a negative growth rate of 1.1% predicted earlier. The Russian economy is also forecasted to expand by 1.3% in 2017.

The signs of recovery are already evident in the Russian economy. The Markit’s Manufacturing Purchasing Managers’ Index (PMI) rose to 51.5 in June. The reading was 49.6 in May. A reading above 50 indicates expansion, while a reading below 50 reflects contraction in the economy.

Similarly, Russia reported a trade surplus of $9.4 billion in May, up from $6.8 billion recorded a month ago. The consolidation in the price of crude oil around the $50 levels has greatly contributed to the positive trade balance. The inflation has also risen to 7.5% in June on y-o- y basis. Thus, considering all these factors, fundamentally, we can anticipate the EUR/RUB currency pair to decline soon.

The EUR/RUB currency pair broke the lower band of the ascending channel last week. The bearishness is also confirmed by the MACD indicator (main line has fallen below the zero line). 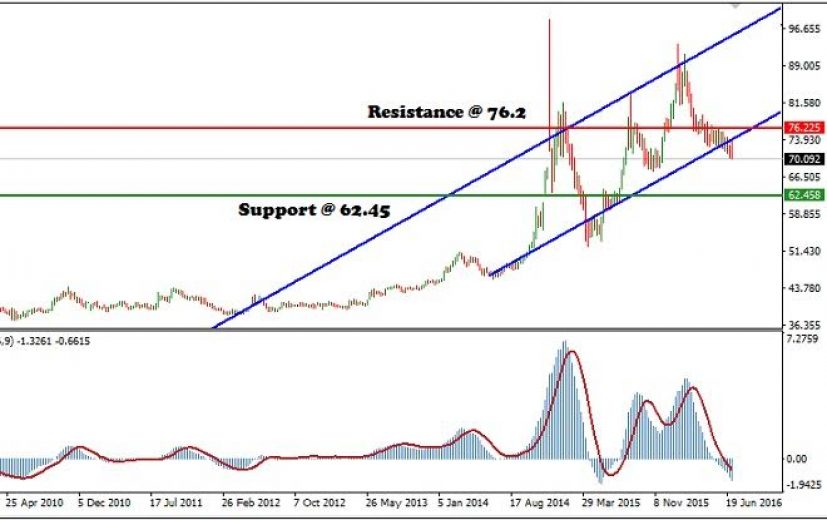 Those involved in binary options trading should purchase a one touch put option from an appropriate broker. The target level for the trade should be no less than 63.50. Likewise, the trader should look for a contract expiry date between the 5th and 10th of August. Such an arrangement would increase the probability of ending the trade in the money.