At the outset, this looks contrasting due to the fact that the Swiss Franc, along with the Japanese Yen, is regarded as a safe haven currency. So, logically, Franc should have strengthened against the New Zealand dollar once the result of the Brexit referendum was announced. However, New Zealand dollar strengthened against the Swiss Franc to hit a high of 0.7013 before closing at 0.6905. The situation is unlikely to change in the short-term, due to the following reasons.

On Friday, the Swiss National Bank confirmed that it intervened in the Forex market to weaken the Swiss Franc, following the rise in demand for the safe haven currency in the aftermath of the Brexit referendum. This trend is likely to continue in the coming days. The New Zealand economy posted better than anticipated GDP growth of 0.7% in the first-quarter ended March.

The analysts had expected a GDP growth of 0.5% on a y-o-y basis. The economy had expanded by 0.9% in the fourth-quarter of 2015. The construction sector contributed to the bulk of the GDP growth of New Zealand. Finally, the dairy prices saw a small recovery of 3.8% in April. Even though it is a case of two steps forward and one step back, the analysts are hopeful that dairy prices will stabilize and eventually rise in the months ahead. The dairy sector contributes to nearly 30% of New Zealand’s export revenue.

Similarly, Statistics New Zealand stated that in the first-quarter, the current account balance increased to $1.31 billion (seasonally adjusted), from $-2.61 billion in the prior quarter.

After touching a low of 0.5763 on August 23rd , 2015, the NZDCHF currency made a trend reversal. Currently, the pair is firmly moving within a rising ladder. The chart reveals a firm resistance at 0.7204, while firm support is seen at 0.6736. The sub-chart indicates that the momentum is positive and rising. 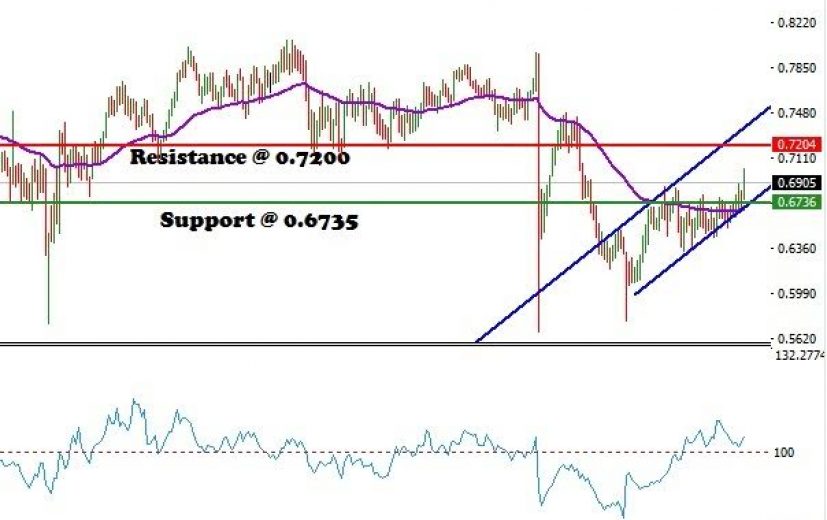 Thus, it is advisable for a Forex trader to take a long position near 0.6880, with a stop loss order below 0.6600. The long position can be closed near 0.7200 levels. Considering the increase in volatility, a one touch call option would be the ideal trade for a binary trader. The target price for the call option contract should be 0.7200 or lower. A three week time period would me more than enough for the currency pair to hit the predicted target, under the current scenario.