The Pound weakened against all the major currencies, including the Canadian dollar, in the past three months mainly because of the Brexit issue. A series of positive economic data and the recovery in the price of crude oil also favored the strengthening of the Canadian dollar against the Pound. However, the past two weeks saw a change in the sentiment among the traders and analysts. The GBPCAD currency pair recovered from a low of 1.8114 to hit a high of 1.8666 on Wednesday. The trend is likely to continue until next month because of the following reasons.

When the Brexit issue gained prominence, the IMF (International Monetary Fund) chief Lagarde warned that it could wipe out 20% of the Pound amid volatility in the forex market. The Pound has already weakened substantially against the Euro and other major currencies. It would not be justifiable to go short at this time when the market has started coming to terms with the referendum. A downside in the Pound is possible only if the referendum results in a Britain’s exit from the EU. Still, the pros and cons of the exit are yet to be assessed in detail before coming to a conclusion.

In April, the UK construction sector saw its lowest growth since 2013. The situation was no different in the manufacturing sector, which contracted in April for the first time since 2013. Even though the Pound fell because of weak economic data, still, it did not record new lows against the Canadian dollar as the market has already factored in most of the bad news.

The Canadian economy, which threw lots of positive surprises in February, is currently facing tough time due to the negative effect of the stronger Canadian dollar. For the second consecutive month (March), the exports declined. The trade deficit widened to C$3.4 billion, from C$2.5 billion in February. The analysts’ estimates were a deficit of C$1.2 billion. Furthermore, the wild fire now threatens to disrupt the oil production (video above). As of now, three companies have cut production as a safety measure. Thus, fundamentally, the GBPCAD currency pair can be expected to rise further in the next few weeks.

Technically, the GBPCAD currency pair has bounced from the major support at 1.8250. The price action has also formed a bullish total harmonic pattern. Thus, we can expect the currency pair to hit the next resistance at 1.9150. 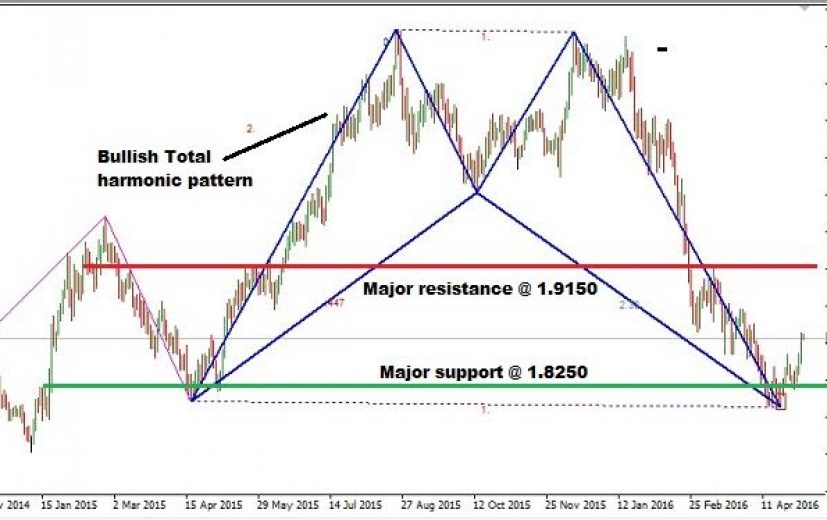 So, a forex trader should purchase the Pound in exchange of the Loonie at the current level of 1.8600. To avoid huge losses, the stop loss order should be placed below 1.8450. The profit should be booked at 1.9100 levels.

In the same manner, to gain from the probable uptrend, a binary options trader should trade a one touch call option contract. A strike price of 1.8800 would certainly favor the trader. To increase the probability of success, the trader should opt for an expiry period in the second week of June.