Due to the reasons mentioned below, both fundamentally and technically, a trader can expect selling to resume at this level.

Fundamentally, the Yen is a low-yielding currency. Thus, it always attracts traders who are active in carry trades (borrow JPY cheaply and purchase high yielding assets).

Thus, speculators, who felt that economic recovery is on the horizon, have ventured into carry trades early this month and purchased the Euro. This led to the rise of the EURJPY currency pair. The uptrend was also aided by the positive annual inflation of 0.1% recorded in Germany. The analysts were expecting a negative value for March.

However, the EURJPY is a volatile currency pair. Even the slightest negative news can reverse the situation very quickly as large positions would be offloaded quickly by traders.

The European Union’s executive arm released a survey report yesterday, which stated that the economic confidence among the Euro zone members have fallen to a thirteen month low. The survey, conducted before the Brussels terrorist attack, indicated that the confidence in the economy has deteriorated by 0.9 points to 103 in March. The decline was higher than anticipated, thereby re-kindling worries about the economy.

Furthermore, the S&P downgraded the economic growth and inflation forecast of the Eurozone few days before. The S&P currently anticipates the GDP of the Euro zone to grow only at 1.5% this year. The previous forecast was 1.8%.

In Japan, the chief economist of Nomura securities stated that an indication of the Japanese economic recovery can be clearly seen in the second half of 2016. The G-7 summit, which will be held in Japan this year, is also expected to support (through projects related to infrastructure) the economy by $942 million.

The Japanese Prime Minister Shinzo Abe has also set goals to double the inflow of tourists by 2020. Last year, approximately 20 million tourists visited Japan and spent about 3.5 trillion Yen ($31.2 billion). Abe hopes to increase the spending to 8 trillion Yen ($71.3 billion) by 2020. Thus, fundamentally, the Yen is expected to strengthen against the Euro in the coming weeks.

Technically, the EURJPY chart indicates firm resistance at 128.50 levels. Major support exists at 125.50 levels. The stochastic indicator, with a reading above 90, reflects a highly overbought scenario. Thus, a forex trader should look for short selling opportunities near the 129 level, with stop loss above 131. The target for the short position would be 122.50. The risk to reward ratio for the trade is 1:3. 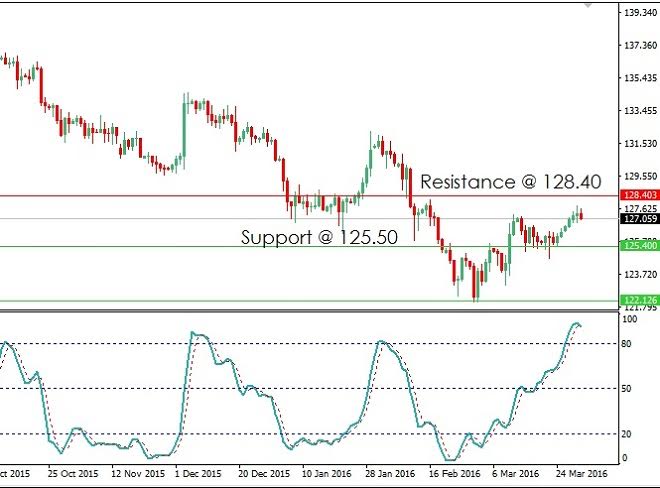 On March 27th, considering the issues faced by the South African industry and possibility of a credit downgrade, we had