The Japanese Yen continued to march forward to hit a two-week high against the US dollar in the first half of this week. With Yen showing no signs of a trend reversal, the economists are wondering the impact it would have on the Japanese economy, which is struggling to expand.

The GDP data indicated a contraction of the Japanese economy in the fourth quarter of fiscal 2015. The decline in consumer spending continues to hurt growth and threatens deflation. Still, the Yen continues to gain against the US dollar.

The worldwide economic slowdown and declining stock market have pushed investors to ward off risky assets and look for safe haven. In this regard, the Japanese Yen has always been a credible and preferred asset. Furthermore, the prevailing bearishness in the commodity market has only strengthened the investors’ belief that recovery may not happen any time soon.

The appetite for riskier assets got another blow when the People’s Bank of China fixed a softer midpoint for the Yuan few months earlier. The equity markets, which recovered earlier this week, got hammered again as Saudi Arabia ruled out further production cuts.

The decision by Saudi Arabia led a decline in the price of crude, which is generally considered as reflector of the financial health of US economy. The investors, in turn, bought the Yen to protect themselves risk.

In the meantime, the Governor of Bank of Japan, Haruhiko Kuroda, stated that accelerating the pace of money printing alone would not boost expectations of future price rises. The Governor also acknowledged that reviving growth through monetary policy has limitations. The market participants have begun to feel that the Bank of Japan is running out of options to weaken the Yen and achieve the inflation target of 2%.

Thus, attempts to weaken the Yen, for example the surprise rate cut to negative in January, does not seem to have a lasting effect. The reason is that the benefit of asset purchases (quantitative easing) will be offset by negative interest rates.

Unless the Bank of Japan takes strong measures to erase the prevailing bullish sentiment on Yen, the long-trend will remain unchanged. In this regard, the Bank of Japan’s monetary policy meeting scheduled next month would be closely monitored by the market participants. The US economy, on the other hand, is yet to come out of sluggishness. Thus, fundamentally, the USDJPY pair can be expected to slide further.

Technically, as shown in the image below, minor support for the Japanese Yen exists at 108, while the major support exists at 103. In the case of an uptrend, the currency pair will face strong resistance (weekly 50% >a href=”http://www.investopedia.com/terms/f/fibonacciretracement.asp”>Fibonacci level) at 113.58. Any uptrend will be temporary and should be used only to unwind long positions. 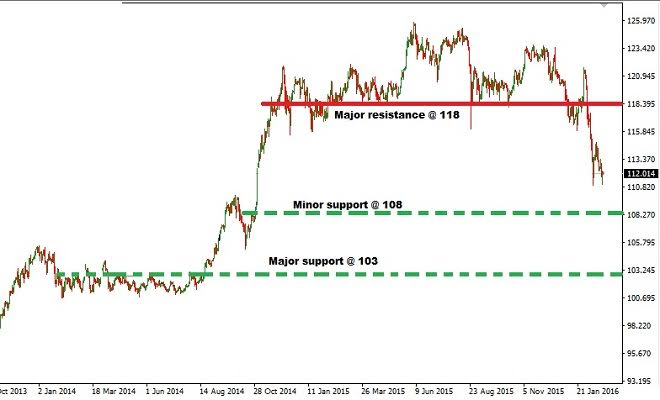 Even a spectacular announcement to weaken the Yen will take the USDJPY currency pair only to 118 levels. Thus, a binary options trader should purchase a put option contract with March end expiry. The suggested strike price for the put option contract is 108.