Last month, the wildfire in the oil sands region of Canada weakened the Canadian dollar against the Euro. The EURCAD pair gained almost 500 pips in a matter of four days to touch 1.48185 on May 4th . The rise of the Euro was also supported by a series of positive economic data. However, the Euro is unable to cross the 1.4820 levels. This has been the story for the past three months. The latest developments, discussed below, in the Euro zone and Canada, inspire traders to take a short position in the EURCAD pair.

The wildfire situation in the oil sands region (Alberta) is largely under control. Most of the oil companies have resumed production. The production is expected to return to pre-fire levels a week or two. A week before, Suncor Energy Inc, the largest crude-oil producer in Canada resumed its production. Shell Canada also announced that production has restarted in their facilities.

On Thursday, the ECB (European Central Bank) raised its growth and inflation forecast for 2016. The inflation is expected to 0.2%, instead of the 0.1% predicted earlier.

Even low oil prices have not translated into a rise in wages. This continues to be a major concern for the policy makers.

ECB’s President Mario Draghi stated that most of the monetary easing measures announced previously are yet to be implemented. To boost growth and stimulate inflation, beginning June, the ECB plans to purchase assets worth Euro 1.74 trillion ($1.94 trillion). This includes purchasing corporate bonds and offering loans at extremely low rates to corporate clients.

The ECB meeting left the interest rates unchanged. However, it warned that the rates can even go into a negative territory in the coming months. Ultimately, this will weaken the Euro. Thus, fundamentally, as we move further in June, there is a high probability of a decline in the EURCAD pair.

Technically, the sub-chart shows that the main line of the MACD indicator has fallen below the signal line. The main line also threatens to break below the zero line. This will eventually lead the EURCAD pair to a steep decline. As mentioned earlier in the article, major resistance exists at 1.4820. On the downside, support exists at 1.4060. 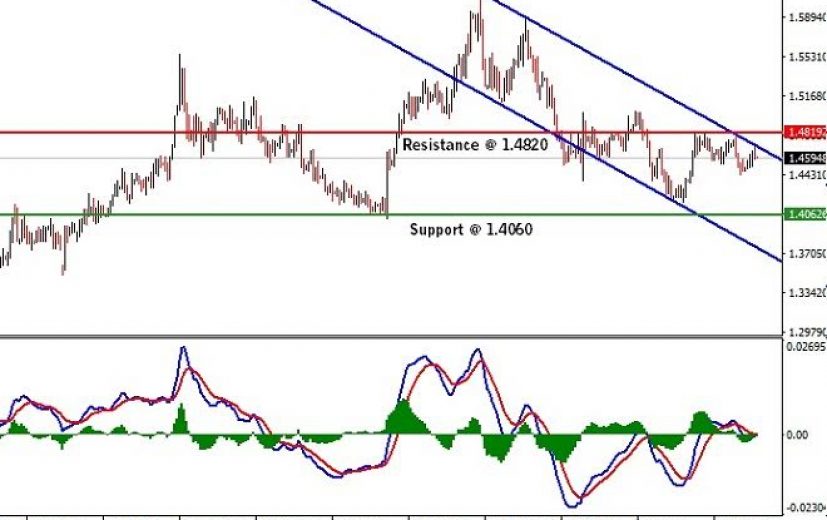 So, considering a probable decline in the EURCAD pair, a currency trader should go short at 1.4600 levels, with a strict stop loss at or above 1.4850. A trader should consider booking at least partial profit near 1.42 levels. The rest of the position can be closed near 1.4050.

A binary trader should go for a one touch put option trade in the EURCAD pair, at this price level. The recommended target for the trade is 1.4300 or higher. While choosing the expiry period, a trader should look for suitable dates in the last week of June.

Yen Drops As Japan Continues to Keep Its Options Open