Yen signals downtrend on decline in Balance of payments

Decline in the price of crude oil and uncertainty surrounding the French election ensured the decline of the CAD/JPY pair to a low of 84.16 in the last day of February 2017.

Trump’s call for a quick renegotiation of the NAFTA agreement and the proposed Border Adjustment Tax (BAT) also assisted in weakening the CAD/JPY pair.

However, the economic data related to Japan and the demand-supply statistics of crude oil indicate that the CAD/JPY pair is poised for a short-term bullish reversal.

The International Energy Agency warned Monday about the possibility of a sharp rise in the price of crude oil due to supply shortages in the coming years. According to the agency, the sharp decline in the price of crude oil in the past three years has resulted in a steep fall in the capital expenditure of oil companies. The decrease in spending on exploration projects would come back to haunt in the form of supply shortage in 2020.

The shale industry has become more efficient by cutting its operational costs by 30% in 2015 and 22% in 2016. Still, the recovery seen in the drilling is far off from what was seen in early 2014. The IEA has predicted a rise in the global demand to 104 million barrels per day. The report may not push the crude price upwards immediately, but will act as a fundamental support near $50 levels, which is crucial for Canada.

The Cabinet Office of Japan announced that the Japanese economy expanded 0.3% q-o-q in the fourth-quarter of 2016. It was below analysts’ estimates of 0.4% growth, but higher than 0.2% economic expansion reported in the prior quarter.

The price chart indicates a major support for the CAD/JPY pair at 84.60. The momentum indicator is rising, while the RSI is on the verge of entering the bullish zone. Thus, charts indicate the possibility of a firm uptrend. 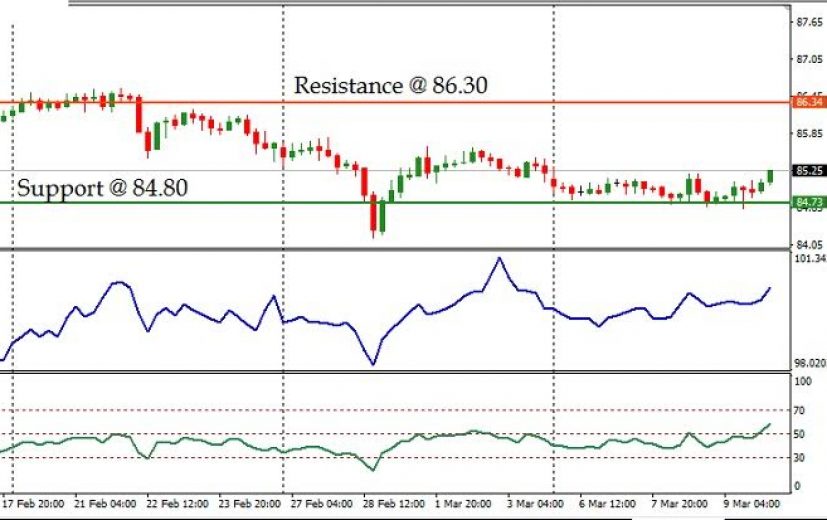 A long position near 84.80 would be appropriate in the CAD/JPY pair at this point in time. To reduce speculation related risk, a stop loss order should be compulsorily placed below 84.20. The long position can be sold for profit at 86.30.

To gain from the predicted bullish reversal, a binary trader can trade a high or above option offered by any reputed broker. To allow adequate time for the exchange rate to move as desired, a trader should ensure that the contract remains valid for at least seven trading days from the time of purchase. The entry should be made when the pair trades near 84.80.

On Wednesday, the Bank of Japan took an arguably unexpected path to weaken the Yen. Having been aware of the