A rate hike coupled with the hawkish stance of the Bank of Canada, strong GDP growth, and the crude oil rally has kept the Canadian dollar one of the best performing currency last month.

On the contrary, soft inflation data and weak wage growth have kept the US dollar in a downtrend. After declining to a low of 1.2410, the USD/CAD pair had recovered to close at about 1.2650 last week. We expect the uptrend to continue due to reasons mentioned below.

The US Bureau of Labor Statistics said Friday that the Non-Farm Employment increased by 209,000 in July.

The reported figures were lower than previous month’s job additions of 231,000, but higher than analysts’ estimates of 182,000.

Employment increased in health care, food services, and professional and business services. The unemployment rate decreased 0.1% m-o-m to 4.3% and in line with analysts’ estimates.

The trade deficit of the US improved marginally in June, mainly driven by an increase in exports. According to the US Census Bureau and Bureau of Economic Analysis, the goods and services deficit dropped $2.7 billion to $43.6 billion in June, from $46.4 billion in May. The exports increased $2.4 billion to $194.4 billion, while the imports fell $0.4 billion to $238 billion.

In the case of Canada, the economy added a mere 10,900 jobs in July, down from 45,300 jobs in the previous month and lower than economists’ expectation of an addition of 13,100 jobs.

Likewise, Canada’s trade deficit widened to $3.6 billion in June, from $1.4 billion in the earlier month. Analysts had expected the deficit to narrow to $1.3 billion. Exports declined 4.3% to $46.5 billion in June. Lower demand for unwrought gold and energy

products contributed to the decline. Imports, led by an increase in demand for gold bullion, grew 0.3% to $50.1 billion.

According to a report from Thomson Reuters, the crude oil exports hit a record high in July, mainly due to an increase in shipments from African countries, and Libya in Particular. In July, OPEC output rose to 33 million barrels, up 90,000 barrels compared to previous month. The West Texas Intermediate crude fell below the psychological barrier of $50 to close at $49.41 on Friday. Additionally, a report from Barclays also forecasts a downward correction during this quarter. A bearish outlook for crude oil would weaken the Canadian dollar. Thus, in the week ahead, overall economic data favor a rally in the USD/CAD pair.

Technically, the stock is moving along the ascending trend line, as shown in the image below. The USD/CAD pair has also crossed above the 50-period moving average. Additionally, the bullishness is also confirmed by the rising on balance volume indicator. 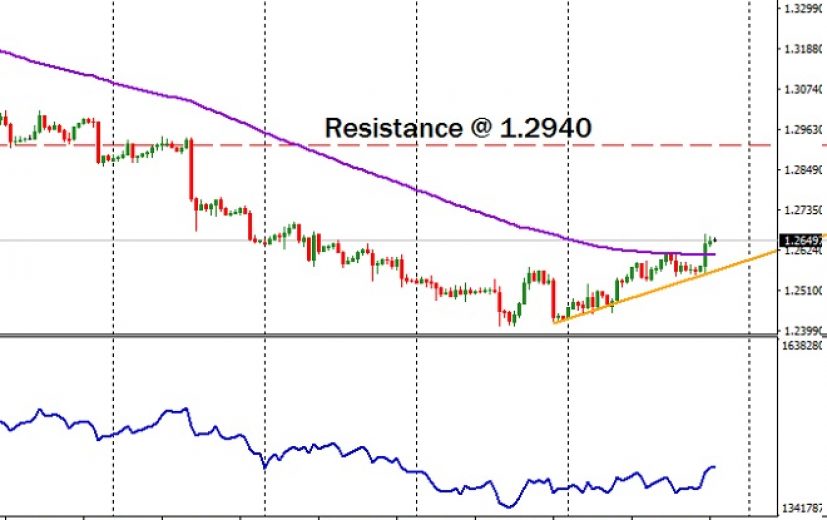 We would also like to mimic a long position in the binary market by purchasing a call option valid until August 16th . The trade will be opened when the exchange rate of the pair is about 1.2630.

The Mexican Peso has been on a tear for the past six months, against the US dollar. With an appreciation

In our November 3 report, we had forecast a downtrend in the GBP/NZD pair. We had also evinced our interest