Since October 25, the Euro dollar has been on a decline against its rivals. The downtrend began after the ECB divulged its tapering plan, which includes the maintaining the current low interest rate for an unspecified period. Concerns over the Catalan referendum also fueled the decline.

On the contrary, the ongoing commodity rally has turned the sentiment bullish towards the Aussie.

The EUR/AUD pair, which has lost about 350 pips in the past two weeks to trade at 1.5100 levels, is expected to decline further in the days ahead.

At the monetary policy meeting held Tuesday, the Reserve Bank of Australia maintained the benchmark interest rate of 1.50% for the fifteenth consecutive month. The central bank had slashed the interest rate by 25 basis points once in August and May last year. The decision was in line with analysts’ estimates. However, the statement accompanying the monetary policy decision has turned the Aussie strong. The RBA stated that it is anticipating an economic growth of about 3% over the next few years.

In the meanwhile, the commodity prices continue to rally due to varied reasons. The Brent crude, which influences the price of LNG, hit a two year high of $64.64 per barrel on Tuesday. Likewise, the iron ore with 62% Fe content, recorded a 5.8% gain on Monday to trade at $63.36 per ton. Coking coal, a raw material used in the steel industry, also gained 2.5% to trade at about $180 per ton. Iron ore, coking coal and LNG are the top three export commodities of Australia.

Elsewhere in Germany, the industrial production declined 1.6% m-o-m in September, worse than 0.7% decline anticipated by analysts. In August, the industrial production grew 2.6%. Notably, the Spanish, Italian, and German PMI (Purchase Managers Index) reading was also below the consensus estimate of economists. Thus, fundamentally, we anticipate the EUR/AUD pair to decline in the week ahead.

The EUR/AUD pair has crossed below the 50-period moving average, while the momentum indicator is moving below the reading of 100. That indicates bearishness in the EUR/AUD pair. So, we forecast the downtrend to continue in the nearby future. 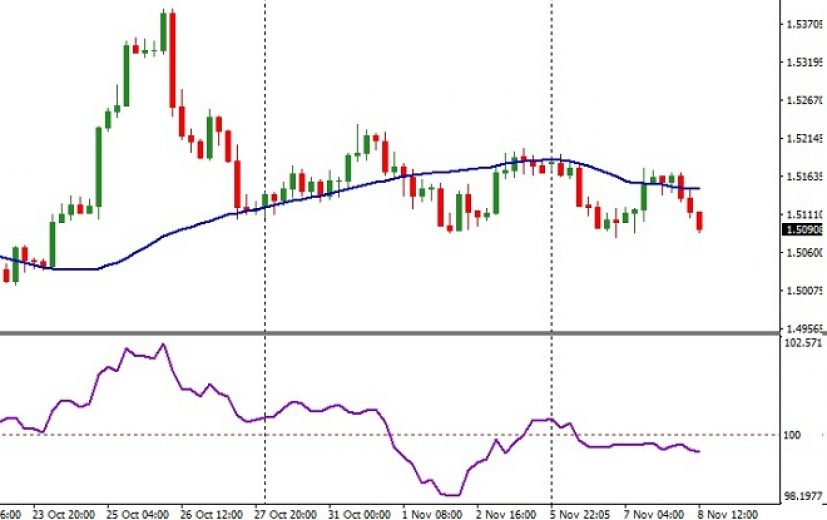 In order to gain from the probable decline, we are planning to go short in the EUR/AUD pair near 1.5120, with a stop loss order above 1.5230. Once we go short, a take profit order will be placed near 1.4980, where the next major support exists.

Similarly, in the binary market, we may invest in a put option provided the contract is valid for one week. The EUR/AUD pair should be trading near 1.5120 for us to go ahead with the trade.

On Wednesday, the Bank of Japan took an arguably unexpected path to weaken the Yen. Having been aware of the