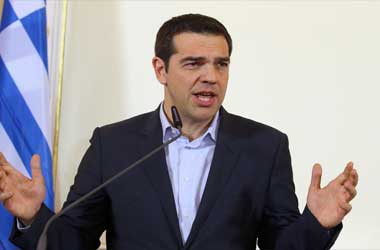 Greece has been in turmoil for a number of months and its citizens have been the ones who have suffered the most. Greece has accumulated a debt of 312.8 billion Euros and one of its biggest debtors is the International Monetary Fund who has imposed a lot of pressure over the past couple of months for Greece to meet its regular monthly repayment.

The European Union was on the verge of expelling Greece as it struggled to make its monthly payments but in the end managed to work out an extension period, giving Greece a little more time to work out a loan repayment process. There has been a lot of pressure on Greek Prime Minister Alexis Tsipras who many believed was defiant and uncooperative during high level discussions.

The Prime Minister’s stance and leadership during these critical times created unrest within the country and most recently a lot of turmoil within his own party as many were unhappy with his offensive stance on Greece’s bailout plan. The murmurs within his own party appeared to have unsettled Tsipras who decided to put in his resignation.

I will shortly meet with the president of the republic and present my resignation and that of my government. I want to submit to the Greek people everything I have done (since taking office in January) so that they can decide once more.

This immediate resignation will require an interim government to take over till a new election can be held.

The new election will most likely take place on the 20th of September and Tsipras believes that the people of Greece will continue to show faith in his leadership and re-elect him once again. Whichever party wins the new election, the new Prime Minister will be in a tough spot as the debt crisis that Greece is facing, continues to be the number one priority that must be addressed.

The European Union, International Monetary Fund, the European Stability Mechanism and the European Central Bank have all agreed to discuss public debt relief measures. Greece will have to continue to repay its massive debt and the challenge of the new leadership will be find new avenues on how the country can consistently raise sufficient funds without having to borrow from one source to pay back the other.