Last week, the USDJPY saw heightened speculative activity, following the news of probable monetary policy easing by the Bank of Japan. The USDJPY currency pair hit a three week high of 111.753. While the US dollar strengthened about 400 pips in a week, against the Japanese Yen, the crude oil managed to rise above the $40 level once again. This has led to speculations that the verbal intervention by the BoJ’s governor Haruhiko Kuroda, made last week, is beginning to see results and the Yen would likely weaken further. Let us see whether and how far the USDJPY can ascend.

Firstly, the message given by Haruhiko was widely reciprocated by the BoJ’s senior officials. In fact, unofficial sources stated that the BoJ may offer negative interest rate on some of the offered loans, very soon. As of now, through negative interest rates, BoJ indirectly penalizes financial institutions for having reserves more than the stipulated percentage. The BoJ officials believe that a deeper interest rate cut on surplus reserves coupled with a rate cut on loans would boost the economy and achieve higher inflation.

It should be remembered that the BoJ’s next policy meeting is scheduled on 27th and 28th .

The market expects that the BoJ would make a move in the above discussed direction to weaken the Yen further. The Stimulating Bank Lending Facility, under BoJ, is currently offering the loans at zero percent interest. The institution, which has so far provided loans worth ¥2.4 trillion, is expected to implement the decision taken in the coming policy meeting.

Secondly, all the market participants anticipate the US Fed to raise the interest rate soon. The Fed has repeatedly stated that there would be at least two rate hikes this year. Ultimately, such an expectation would also bolster the US dollar against the japanese Yen. 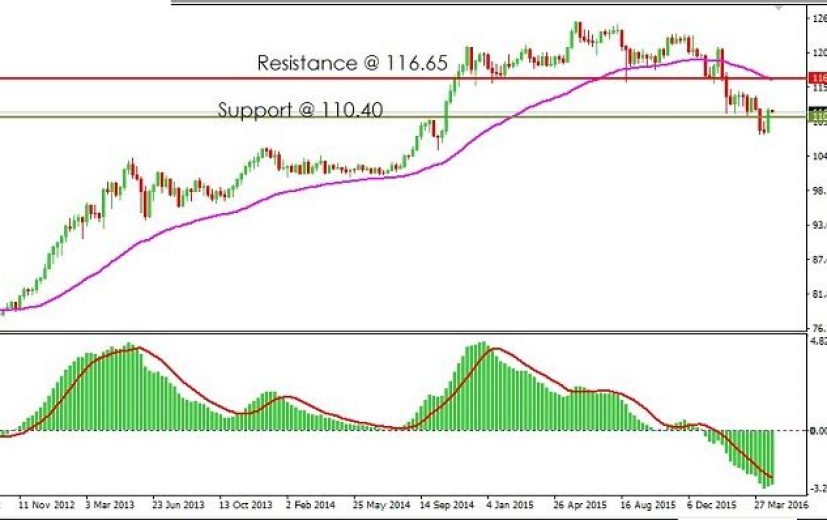 So, a long trade can be taken confidently by a currency trader. The stop loss order can be below 109.40, while the order to book profit can be placed at 113.50. The risk to reward ratio, based on the levels mentioned above, is 1:2.