The Hungarian Forint weakened nearly 3% against the Swiss Franc in the past one week. It can be argued that the investors’ nervousness, arisen out of the Brexit issue, is the primary reason for the CHFHUF pair to rise from 280.70 to 289.80 in a short period of time.

However, as explained below, the decline was also fuelled by the concerns related to the Hungarian economy.

During the first quarter of 2016, the GDP growth of Hungary declined sharply to register its smallest expansion in three years. On a y-o- y basis, the GDP grew 0.9%.

According to the Central Statistics Office of Hungary, the GDP growth was well below the 3.2% reported in the fourth-quarter of 2015. The market had expected the GDP to grow by 2.3%. On a q-o- q basis, during the first-quarter, the GDP contracted by a seasonally adjusted 0.8% and represented the first decline in three years. For the current year, the GDP growth has been revised down by 0.2% to 2.2%.

The Swiss National bank (SNB) is scheduled to have a policy decision meeting today. However, the market does not expect any change in its stand on the policy. Based on the better-than- expected Swiss producer and import price data announced earlier this week, some analysts even expect the SNB to express an optimistic view of the economy. In the worst case, even a dovish sentiment is not expected to weaken the Swiss Franc until the Brexit referendum issue gets over.

The chart shows that the CHFHUF pair started breaking out of the declining channel as early as February. As indicated by the aqua coloured bubble, the upper band of the declining channel has now become the support. The money flow index indicates that money is flowing from the Hungarian Forint to Swiss Franc. Thus, we can expect further uptrend in the currency pair. 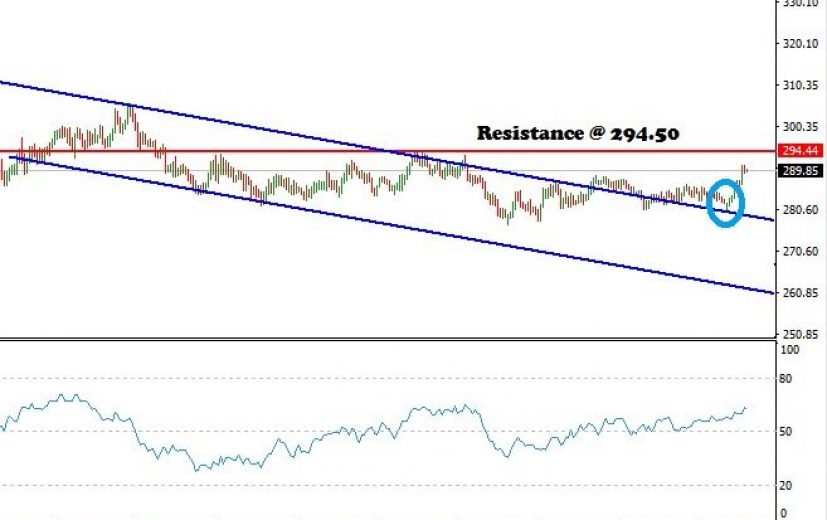 A currency trader can consider taking a long position near 288 levels in the CHFHUF pair. In such a case, the stop loss order should be placed below 285. For the long trade, the order to book profit should be placed at 294. The trade carries a risk to reward ratio of 1:2.

It is needless to say that a one touch call option would be the suitable trade for a binary trader. The target for the call option can be 293 or lower. A two to three week time span would be more than sufficient as far as the contract expiry is concerned.

The US dollar rallied against the Mexican Peso last week, mainly on expectations of announcement of sweeping changes that could