Last week, the Aussie went up from 81.50 to 84.77 against the Japanese Yen. Surprisingly, there was nothing extraordinary about the Australian economy. Well, the positive Chinese economic data spurred the AUDJPY currency pair.

Such is the dependence of the Australian economy on China. A G-20 export statistic shows that Australia is at the top of the list of countries, whose export revenue is heavily dependent on China.

The share of country’s total exports to China has increased from a mere 14.2% in 2007 to 36.1% in 2014. The Australian Bureau of Statistics (ABS) also revealed in 2015 that China is on course to become the numero uno investor in Australia.

In 2015, the Chinese investment in Australia is lower than the Australian investment in China by more than 40%. Thus, it can be understood very clearly that Australian investors would be worst affected by any decline in the Chinese economy. The Commonwealth Treasury estimates that the GDP growth of China would be in the range of 6% to 7% in 2016. The first-quarter GDP growth of 6.7% announced last week was in line with the projections. Similarly, the March industrial output of 6.8%, comfortably crossed the analysts’ estimates of 5.9%. Furthermore, the March retails sales of 10.5%
also went past the consensus estimates of 10.4%.

As far as Australia is concerned, iron ore is one of the main sources of export revenue. The price of iron ore had appreciated from $41.5 in January to about $58 in April. This continues to favor the rise of the Australian dollar.

In the case of the Yen, the Bank of Japan is doing all that is needed to keep the currency weaker. In this regard, the BoJ’s Governor Haruhiko made a verbal intervention last week by saying that Yen’s ascent is “excessive” so far this year.

Haruhiko also stated that BoJ will not restrict itself from implementing monetary measures, including deeper negative rates, to weaken the Yen.

The parabolic SAR indicates that technically the currency pair is on the verge of another round of uptrend. This is also confirmed by the stochastic indicator, which is inclined upwards and in the process of crossing the 50 level. 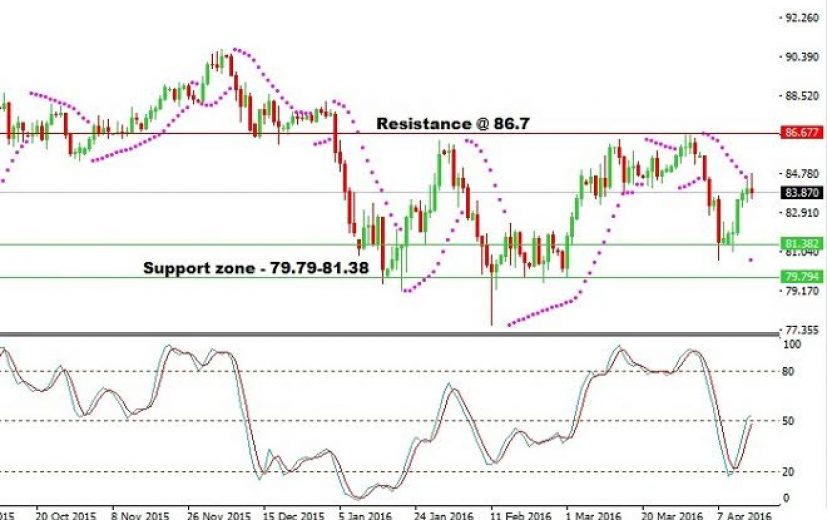 Thus, a forex trader should take a long position in the AUDJPY currency pair at the prevailing price (83.50), with a stop loss below the lower band (79.79) of the support zone. A crossover above the major resistance at 86.68 will take the currency pair to 92.26. Australian binary options traders should purchase a one touch call option contract with expiry in the third week of May. The ideal target level for the one touch call option contract is 85.0.

The less than hawkish stance taken by the Reserve Bank of Australia in the May monetary policy meeting, weak GDP