The Canadian dollar was on a tear against the G10 currencies for the most part of July. However, the Loonie declined against some of its rivals in August as geopolitical tensions between North Korea and the US forced investors to look for cover. The Swiss Franc, on the other hand, rallied as demand for safe haven assets increased. The weakness in the crude price also kept the Canadian dollar under pressure.

However, on last Friday, the CAD/CHF pair gained the lost ground to close at 0.7790. Following the recent economic data from Canada and Switzerland, we anticipate the Canadian dollar to rally further in the days ahead.

Last Thursday, Statistics Canada stated that the economy grew at the fastest annualized rate in six years. The GDP grew at a rate of 4.5% in Q2 2017 to $1.47 trillion. Economists at Royal Bank of Canada had anticipated a GDP growth of 3.7%. During the January-March quarter, the economy grew by 3.7%. The report also revealed that the GDP grew 0.3% m-o-m in June, versus analysts expectations of 0.1% growth. In May, the economy had expanded by 0.6%. The Canadian economy surpassed expectations easily as Quebec based construction workers returned back to work, following a labor dispute.

Following the strong economic data, the market now gives 85% chance of another rate hike in 2017. It can be remembered that the Bank of Canada raised the benchmark interest rates to 0.75% in July on the basis of improving economic conditions. The central bank is scheduled to meet later this week to decide the monetary policy. The Swiss Franc is expected to turn weak due to three factors – easing of tension between the US and North Korea, SNB’s intervention, and poor retail sales data. While there is no guarantee that Kim Jong Un would refrain from upping the ante against the US, as of now the tensions have eased. That has caused the equity markets to return to the recent high. As risk appetite increases, the Swiss Franc would lose strength. Even if the tension persists, the Swiss National Bank will not permit the currency to strength much as it would hurt the economy. If necessary, the SNB would intervene to push the Franc lower, as it had happened in the past. Finally, the weak retail sales data are also expected to turn the Franc weak.

The retail sales declined 0.7% y-o-y in July, contrary to analysts’ expectations of a 1.7% increase in turnover. In June, the retail sales had increased by an upwardly revised 1.7%. Thus, economic data and expectations of a rate hike is expected to keep the Canadian dollar bullish against the Swiss Franc. Last Friday, after trading between 0.7550 and 0.7760 for almost a month, the CAD/CHF pair had closed above the upper band of the range. The rising DeMarker indicator also confirms the bullishness in the currency pair. Thus, we anticipate the pair to reach the next major resistance at 0.7930, over the next few days. 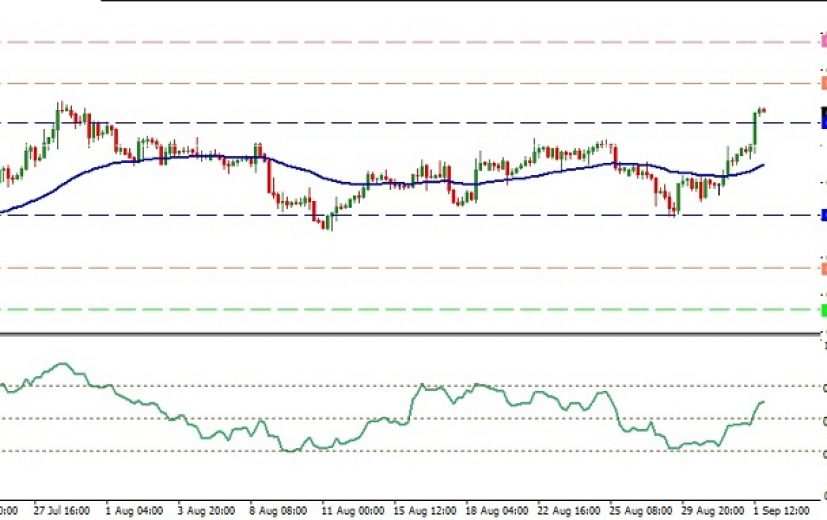 To trade the predicted uptrend, we are looking at the possibility of opening a long position near 0.7740, with a stop loss order below 0.7650. The trade would be unwound when the pair reaches 0.7930.

With an investment in a high or above option, we hope to gain from the upswing. The option should be active for a period of seven trading days, while the entry would be made when the pair trades at about 0.7740.

The exceptional manufacturing PMI reading of 56.9, reported earlier this month by the UK Office for National Statistics, propelled the