The GBP/USD pair remains range bound between 1.2050 and 1.2680 for the past four months. Uncertainty about the Fed rate hike and Trump’s election rhetoric kept the US dollar weak in October and November.

On the contrary, Fed’s rate hike coupled with a statement underlining its intention to go for as many as three hikes in 2017 propelled the US dollar during the period between December and mid-January. Trump’s inflation friendly policies also assisted the Greenback to garner strength against the Pound.

However, based on the facts mentioned below, we anticipate the GBP/USD to turn bullish and break above the upper band of the range.

The Greenback fell in the second week of January, following Trump’s remark about its strength. As if this was not enough, Steven Mnuchin, U.S. Treasury Secretary nominee, stated that a very strong dollar can have a short-term negative impact on the economy.

The same opinion was echoed by Trump’s trade advisor Peter Navarro earlier this week. Navarro mentioned that Germany uses the grossly undervalued Euro to gain advantage over the EU member states and the US. Economists are wondering whether the US government is trying to talk down the value of the US dollar. The statements from the senior government officials are likely to keep the US dollar weak in the short-term.

The FOMC statement released on Wednesday did not provide any sort of information regarding normalization of the interest rates. The statement, however, took notice of the rise in optimism among the US consumers. Analysts anticipate another hike in the US benchmark rates only in June.

The UK economy, on the other hand, continues to remain in a good shape as is evident from the recent GDP data. The Office for National Statistics stated that the UK’s economy expanded 0.6% in the fourth-quarter, against market’s expectation of a 0.5% growth. On a y-o-y basis, the economy clocked a growth of 2.2%, which is 0.1% higher than analysts’ estimates. Thus, fundamentally, the GBP/USD pair can be expected to remain bullish.

The GBP/USD pair has formed a double bottom pattern as shown in the chart below. The rising momentum and accumulation/distribution indicator shows the increasing support from investors to the Pound. Technically, this reflects a possibility of further uptrend of the currency pair. 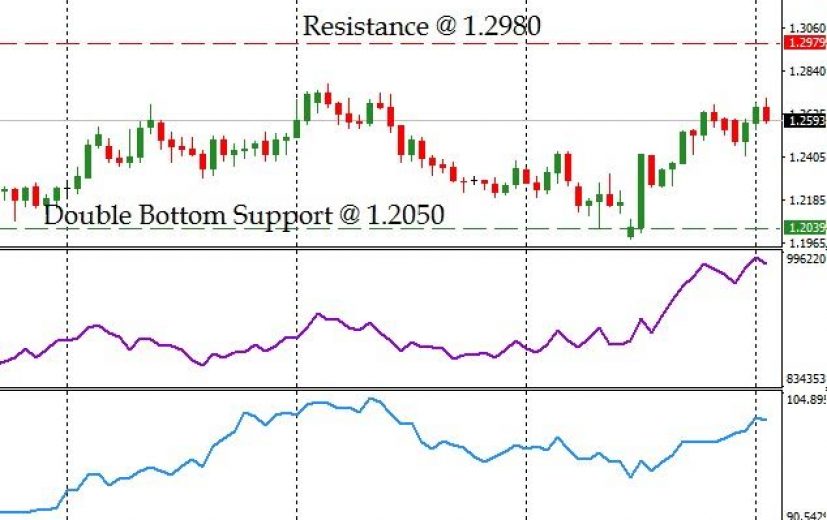 A currency trader can hope to gain from the probable uptrend by opening a long position near 1.2520. A stop loss order should be placed below 1.2350 to limit losses. The profit can be booked near 1.2980. The trade carries a risk to reward ratio of about 1:3.

The analysis can be used to trade binary options as well. A call option can be bought when the pair trades near 1.2320. Adequate time for the uptrend should be given by choosing a contract expiry date which falls after one week from the day of investment.