After dipping to a historical low against most of the currencies in mid-October, the Pound started recovering in an unexpected manner. The uptrend was aided by the market’s perception that the hard-Brexit has been priced in already.

Another factor which ensured recovery in the Pound was the series of positive economic data.

On the other hand, the Greenback’s rally weakened the Yen and relieved the pressure from the Bank of Japan. However, going into New Year 2017, we anticipate the GBP/JPY pair, which currently stands at 143.30, to decline because of the reasons mentioned below.

Toru Ibayashi, the Japanese equity research head at UBS, stated that the market has overblown expectations for fiscal expansion. Ibayashi is of the opinion that the market has by and large discarded the protectionist policies, which would take a front seat, when Trump assumes office in January 2017. This would begin to strengthen the Yen in the days ahead. Most analysts, including the former UBS Wealth Management’s Japanese currency chief Eisuke Sakakibara, believe that the Yen would ultimately fall below 100 per dollar in 2017. This would create a ripple effect in other Yen based currency pairs, including the GBP/JPY.

The anticipated triggering of the Article 50 – in the Q1 2017 – is expected to turn the Pound weak and volatile. Furthermore, the Pound would also be under pressure when the UK policymakers start negotiating with their EU counterparts to begin the process of leaving the EU. According to analysts at Deutsche bank and Morgan Stanley, the Pound would lose at least 5% of its value against the US dollar and the Euro, during the period of negotiations. It can be remembered that the Bank of England had cautioned the residents to be prepared to embrace a period of high inflation in 2017. Historically, high inflation discourages consumer spending, which is the engine for GDP growth. The above facts indicate that the Pound would remain bearish in the first-half of 2017. In particular, analysts anticipate the Pound to return to its lowest level in the first-quarter of 2017.

So, fundamentally, based on the above arguments, we can expect the GBP/JPY to decline in the weeks ahead.

The GBP/JPY pair is facing resistance at 144.20. The stochastic indicator is currently in the bearish zone, while the declining MACD indicator underlines the loss of momentum. This indicates that the currency pair has higher chances of going down further. 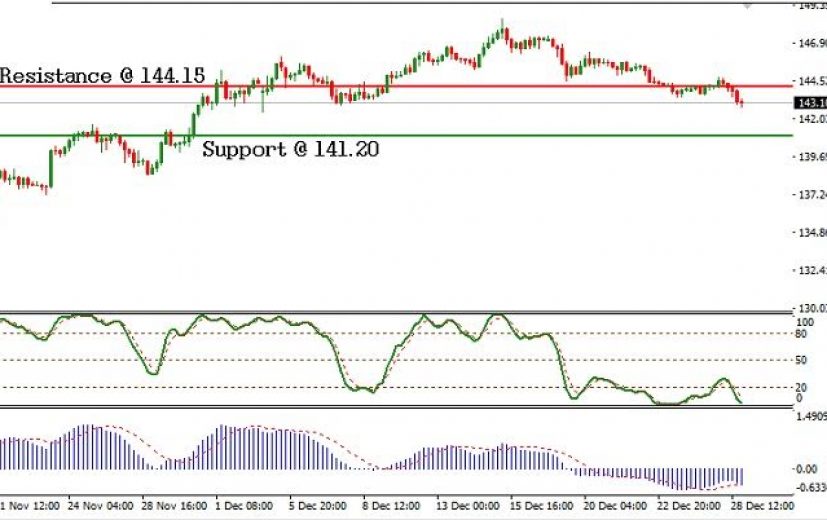 A binary trader can invest in a low or below (equivalent of a put option) contract to take advantage of the probable downtrend of the GBPJPY pair. A below contract, with expiry date on or around 9th of January, can be bought when the currency pair trades above the 143.10.

On 5th Aug, we had recommended taking a short position in the AUD/MXN pair at 14.40 levels with a target