Since October 15, the GBP/NZD pair has gained about 1000 pips to reach a high of 1.9330. A rise in inflation above the Bank of England’s target level of 2% has sparked expectations of a rate hike, thereby strengthening the Pound.

On the contrary, lack of a clear mandate for any of the parties in the general elections and a decline in the dairy product prices has weakened the New Zealand dollar considerably.

Now, the new coalition government is expected to change the objectives to be achieved by the Reserve Bank of New Zealand.

Some of those objectives, as explained below, would definitely weaken the Kiwi dollar further. Thus, we anticipate the GBP/NZD pair to rally further in the days to come.

Earlier this week, Grant Robertson, the finance minister of New Zealand, stated that the primary objective of the government is to bring down the unemployment rate under 4%, from the current 4.8%. More importantly, Robertson wants the Reserve Bank of New Zealand to play a bigger role in achieving the goal. In this regard, the New Zealand government is expected to alter the RBNZ Act such that it will include an employment objective.

Analysts also believe that the prevailing interest rates in the New Zealand are perfect for the current economic situation and lowering it further will increase the risk profile of the country and also create imbalances in the economy. The housing market is already overheated and lower interest rates will have a tremendous upward pressure on the cost of housing. Thus, overall, it is a negative development for the Kiwi dollar.

In the meanwhile, the UK is facing a sharp rise in inflation above the central bank target of 2%. Thus, economists had predicted the Bank of England to raise interest rates during the November policy meeting. As predicted, the BoE raised the benchmark interest rates to 0.5% on Thursday. Seven of the nine member policy committee voted in favour of a hike. The rate hike will further close the interest rate differentials between the New Zealand and UK, resulting in a further decline in the demand for the Kiwi dollar.

Further, a final agreement on Brexit is now expected in December. The EU’s chief negotiator Michel Barnier has agreed to speed up the pace of the Brexit talks, while the UK’s negotiator David Davis has hinted further concessions to EU nationals. That is also expected to relieve the stress out of the Pound. Thus, fundamentals favour a rally in the GBP/USD pair.

The price chart indicates strong support for the GBP/NZD pair at 1.8860. Further, the RSI of moving average indicates an oversold scenario. Thus, we expect the pair to move up and reach the next resistance level of 1.9280. 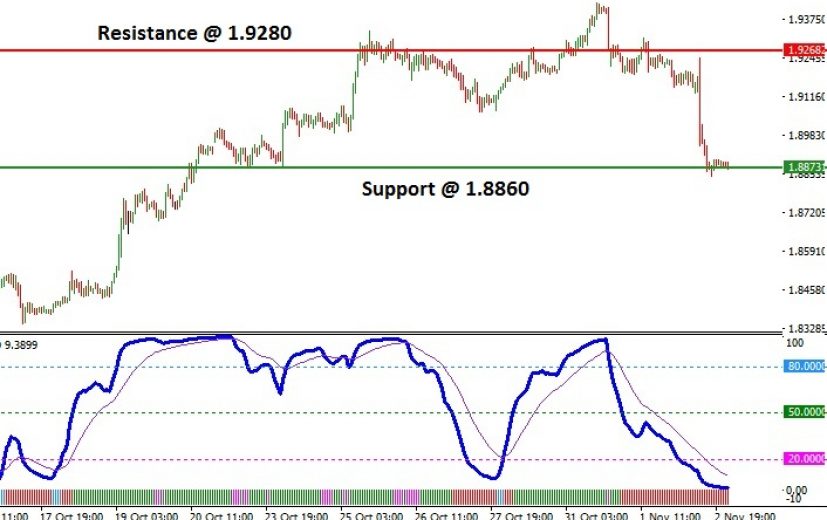 We may establish a long position in the GBP/NZD pair, on the basis of this analysis. A long position near 1.8860 is preferred. To minimize risk, a stop loss order will be placed below 1.8740. The long position will be diluted near 1.9140.

Along with a long position in the currency market, we may also hold a call option offered by a binary broker to increase the returns from the analysis report. If we decide to establish a trade, then an option expiring on or around November 11 will be acquired when the pair trades near 1.8860.