In mid-May, the Brazilian Rial plunged against the Greenback when a local newspaper reported that President Michel Temer asked Joesley Batista, chairman of the meatpacking giant JBS SA, to continue paying former legislator Eduardo Cunha, who is currently serving a prison sentence for money laundering and corruption.

The news created doubts about the ability of the Brazil’s government to implement key economic reforms.

However, as explained underneath, the recent economic data indicates that the Brazilian economy is making a comeback. Thus, we are bearish on the USD/BRL currency pair.

For the first time in two years, boosted by a strong rise in exports, the Brazilian economy expanded by 1% q-o-q in the first three months of 2017. The GDP growth was in line with expectations. In the previous quarter, the economy contracted by a downwardly revised 0.5%.

Brazil also posted a record trade surplus of $7.66 billion in May, up 19% from $6.437 billion last year, and in line with analysts' estimates. Record harvest of soy contributed mainly to the trade surplus. In the first five months, Brazil recorded a trade surplus of $29 billion.

On the other hand, the US Bureau of Economic Analysis reported a trade deficit that widened to $47.6 billion in April, from $45.3 billion in the earlier month. On average, analysts expected trade deficit of $45.5 billion.

Notably, on Friday, the US Bureau of Labor Statistics reported that the economy had added 138,000 non-farm jobs in May, down from 174,000 jobs in the previous month, and lower than Consensus estimates of 181,000. Similarly, the average hourly wages increased only 0.2% m-o- m in May. The non-farm payrolls (NFP) report has raised doubts about the possibility of the Fed’s plan to raise benchmark interest rates thrice this year. Thus, economic data supports a correction in the USD/BRL pair in the short-term.

The USD/BRL pair has broken the resistance level of 3.2810, as shown in the chart below. The DeMarker oscillator is declining after reaching a reading of 0.7. That indicates exhaustion in the USD/BRL pair. Thus, we can expect the pair to cover the technical price gap soon. 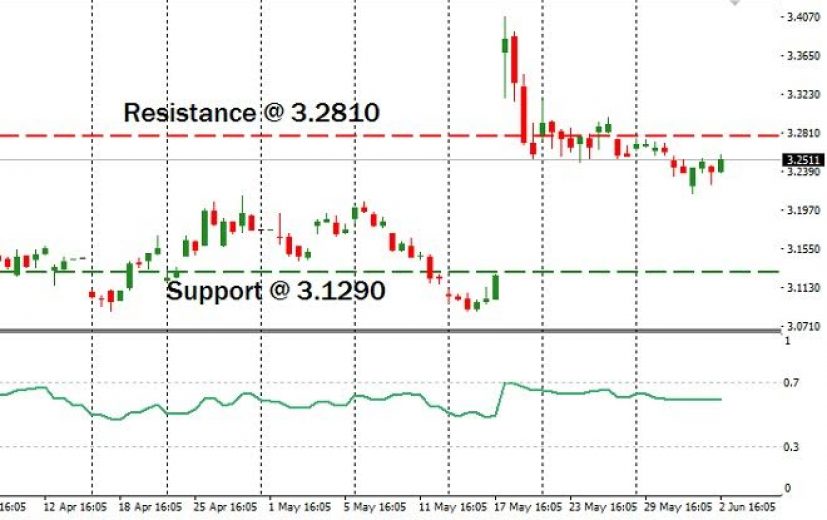 We prefer to trade the impending downtrend by going short in the USD/BRL pair at 3.2520 levels. To attain a comfortable risk-reward ratio, a stop loss order would be placed above 3.2810. We plan to book profit near 3.1300, which is a major support level.

In our binary broker’s trading platform, we may purchase a put option contract to earn from the USD/BRL pair’s probable decline. We would invest in the option when the pair trades near 3.2520. Finally, we prefer a contract which expires in a week.

Kiwi up on strong dairy prices, weak US Treasury yields

Off late the Kiwi dollar is on a tear. The currency continues to climb against its rivals despite weak inflationary