The decline in the price of crude oil enabled the New Zealand dollar to strengthen against the Canadian dollar in the past one week. From a low of 0.9330, the NZD/CAD pair hit a high of 0.9440, before ending the week at 0.9405.

Considering the weak economic data from Canada and the persisting weakness in the price of crude oil, we believe that the NZD/CAD pair will remain in an uptrend for next two weeks at the least. The data from the Statistics Canada indicated that the country lost 31,200 jobs in July. It was far away from the analysts’ expectation of an addition of 10,200 jobs. In July, on m-o-m basis, the unemployment rate in Canada stood almost flat at 6.9%.

On the other hand, in June 2016, New Zealand reported a trade surplus of $127 million, compared to a trade deficit of $178 million in the prior year. Exports grew 2.6%, while imports declined 4.6% on a y-o-y basis. A 47% rise in the kiwifruit exports contributed to the trade surplus.

The inflation rate remained unchanged at 0.4% in the second-quarter ended June, compared to the prior-quarter (March) of 2016. The 3.3% rise in the housing-related prices contributed mainly to the rise in the consumer prices. This was offset by a 5.3% decline in the transport prices. Expressing confidence about the economy, the Reserve Bank of New Zealand announced that there will not be a need for another rate cut as the modest recovery in the commodity prices have increased the chances of achieving the inflation target of 2%. The current benchmark rate in New Zealand is 2.25%.

Technically, as shown in the chart, the NZD/CAD pair received support from the investors and speculators at 0.9370 levels. The RSI indicates bullishness in the asset with a crossover above the reading of 50. The next resistance for the currency pair is at 0.9520. 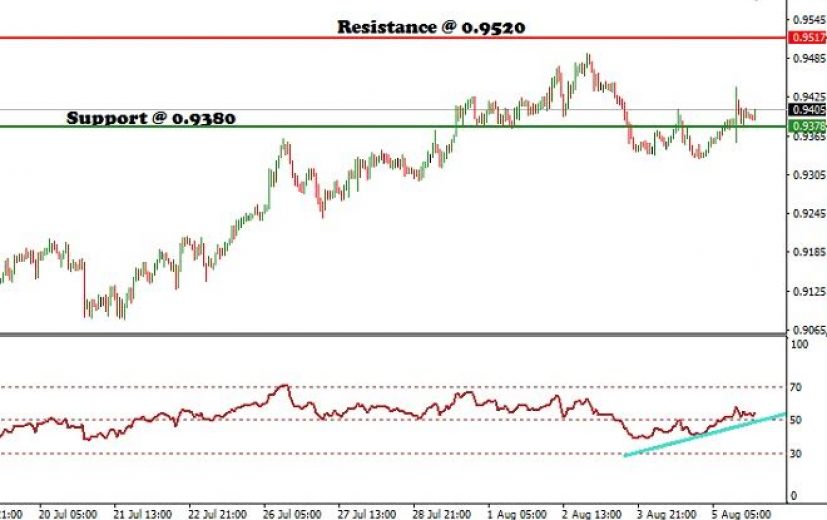 A binary trader should look for a one touch call option contract in a suitable binary broker’s platform. Additionally, the trader should also make sure that the contract has a target price of 0.9500 or lower. To increase the chances of ending the contract in profit, an expiry date in the last week of August should be chosen as well.