Since the beginning of July, the NZD/CAD pair had been on a steady decline. The decline in the average price of dairy products in the July auctions and downwardly revised growth outlook was mainly responsible for the Kiwi dollar to decline.

In case of the Loonie, the rate hike and the hawkish stance of the Bank of Canada aided the uptrend. After losing nearly 600 pips to close at 0.90070 earlier this week, the NZD/CAD pair is making an attempt to reverse the trend.

We expect the currency cross to begin an uptrend on the basis of arguments presented below.

The rate hike in June, and the subsequent Canadian dollar rally seems to have a negative impact on the economy as evident from the decline in the Raw Material Price Index (RMPI) and Industrial Product Price Index (IPPI) reading. While the RMPI declined 0.6% m-o- m in July, the IPPI fell 1.5%. Analysts had expected RMPI and IPPI to decline by 0.2% and 0.7% only. The RMPI and IPPI had declined by 3.6% and 1.1% in June, respectively. Notably, IPPI’s decline in July has been the deepest since December 2014.

The hurricane Harvey has forced US refineries to shut down. That has resulted in a lower demand for crude oil. It may take few weeks for the refineries to start buying crude at the original pace. Until then, crude oil is expected to remain bearish. Thus, poor economic data and bearish outlook for crude is expected to turn the Canadian dollar weak.

In the case of New Zealand, contrary to expectations, the trade balance swung to a N$85 million surplus in July, compared with a deficit of N$351 million in the same period last year. Analysts had anticipated a deficit of N$200 million. An increase in the volume of exports had more than offset the slight decline in the average price of dairy products.

It can be remembered that the unemployment rate in New Zealand declined to a nine year low of 4.8% in the second-quarter of 2017, from 4.9% in the previous quarter, and matched analysts’ expectations. Thus, fundamentals favor a rally in the NZD/CAD pair.

The price chart indicates a proven support for the NZD/CAD pair at 0.9030. The stochastic oscillator is also making new highs. The currency pair has also made a bullish crossover above the 32-period moving average. Thus, we can expect the currency pair to move up firmly. 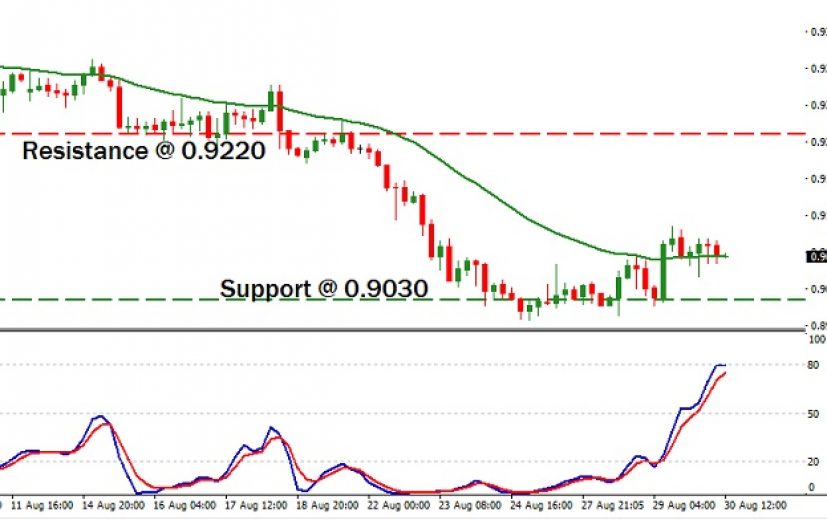 We would also like to invest in a call option valid until September 9th . The option would be bought from a suitable binary broker, when the currency pair trades near 0.9080 in the OTC market.

Yen Drops As Japan Continues to Keep Its Options Open