In our November 3 report, we had forecast a downtrend in the GBP/NZD pair. We had also evinced our interest to go long in the currency cross near 1.8860, and simultaneously invest in a call option.

A week later, the GBP/NZD currency pair was trading at 1.9150 levels and we booked our profit in both the trades.

We anticipate a decline to begin in the currency pair due to reasons given below.

On Monday, the UK Prime Minister Theresa May got the green light from her ministers to increase the Brexit bill offer, in order to break the deadlocks in negotiations with the EU. However, May is not expected to explicitly give a figure. The EU has demanded €60 billion to be paid as the exit bill. In this regard, the UK’s negotiator David Davis has called on the EU to compromise.

As it can be understood, Brexit bill is the main hurdle to the smooth exit. The EU’s chief negotiator Micheln Barnier has already given a two week deadline to provide clarity on the Brexit bill issue. Barnier has also warned that the contingency plans are ready should the talks collapse. Apart from these issues, May is also staring at potential problems from the political uncertainty in Germany. A few of the legislators in Germany may try to create a hard-Brexit for the UK by holding off concessions.

As far as the high inflation in the UK is concerned, it can be argued that most of the rise was caused due to a weak Pound. The domestic service sector inflation has not changed much since 2015 and almost all the inflation was due to imports which became expensive. Since the Pound has strengthened in the past few weeks, the inflation is now expected to decline. So, there will not be any need for the Bank of England to raise rates in 2018. While these developments turn the Pound bearish, conditions favor a bounce back in the Kiwi dollar, according to Dennis Tan, an analyst at Barclays.

A change in the RBNZ’s mandate to include employment, cut back in the number of working visas available to migrants and proposed restrictions on foreign ownership of residential property has turned the market’s sentiment bearish towards the Kiwi dollar.

However, Tan is of the opinion that the planned expenditure policies of the new coalition government will enable the economy to expand in a healthy manner. Further, the output gap has closed to a large extent and the unemployment rate has dropped to 4.6% in September. The minimum wage is also expected to rise to $16.50 in April 2018, from the current level of $15.75. Thus, fundamentals favor a short-term downtrend in the GBP/NZD pair.

The price chart indicates resistance for the GBP/NZD pair at 1.9430. Further, the on balance volume indicator is on a decline. Additionally, the William Vix-Fix indicator has crossed above the recent high. That confirms an increase in the selling pressure. So, it would be wise to hold a short position in the currency pair. 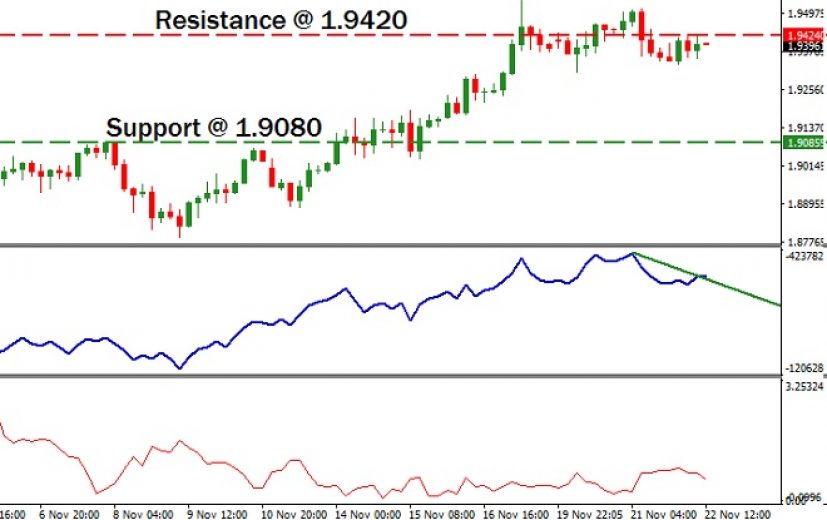 Likewise, in the binary market, we wish to position ourselves to gain from the downtrend by investing in a put option. We may proceed to open an option trade as long as a contract valid for a period of one week is available. Further, a strike price of about 1.9420 is preferred for the trade.