In the past one month, the GBP/NZD pair had rallied by about 1100 pips. A sharp fall in the average price of dairy products, during the August auction, weakened the Kiwi dollar considerably against the British Pound.

Likewise, a strong rise in the UK’s inflation led to expectations of a rate hike by the Bank of England. That kept the Pound stronger against the New Zealand dollar, despite North Korea’s missile tests.

However, due to the reasons mentioned below, we expect the GBP/NZD to decline from the current level of 1.8470.

Retail sales in the UK increased 1% m-o-m in August. Analysts had expected a mere 0.2% rise in the retail sales volumes. Notably, the July retail sales growth was revised upwards to 0.6%, from the previous estimate of 0.3%. The overwhelmingly positive growth in retail sales was mainly due an increase in spending on clothes.

However, Ruth Gregory, an economist at Capital Economics, is of the opinion that the strength of the economy cannot be accessed by a spurt in the monthly retail sales. Gregory points out that consumer spending is on a downward trend and the annual sales volume grew only 2.2% in the August quarter, compared with about 6% growth recorded at the end of 2016.

Furthermore, analysts are skeptical whether the European negotiators would accept Theresa May’s Brexit divorce bill offer of €20 billion, in return for a trade deal. Unless the matter moves forward, the Pound would remain under pressure.

In New Zealand, a pre-election survey conducted by One News showed a 46% chance for the incumbent National Party to form the new government. The poll revealed that the Labor Party has only a 37% probability of winning the election. Notably, the previous survey gave a 44 % chance for the Labor Party to form a government. According to David Adams, a strategist at Morgan Stanley, investors would be happy with the victory of the National Party, as there will be no abrupt change in prevailing fiscal or other crucial policy decisions.

In the global dairy auction conducted on Tuesday, the average price of dairy products increased for the second successive time to $3,368 per ton. Correspondingly, the GDT price index rose 0.9%. As much as 34,117 tons of dairy products were sold, up from 33,501 tons in the earlier auction. Thus, economic data and political developments support the strengthening of the Kiwi dollar against the Pound, which remains under pressure due to Brexit uncertainty.

The GBP/NZD pair is on a downtrend, after failing to go past the resistance at 1.8570. The bearishness is also confirmed by the declining stochastic oscillator. Thus, we expect the currency cross to reach the next major support level of 1.8030. 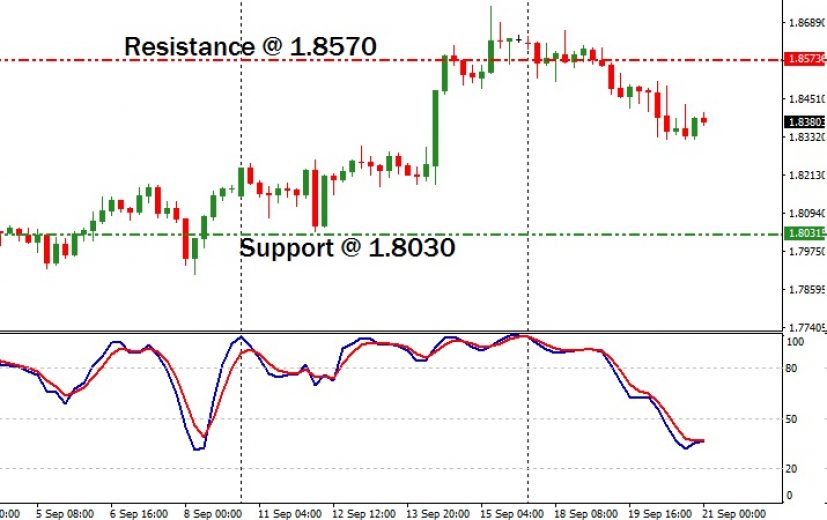 We wish to benefit from the downtrend by going short in the GBP/NZD pair near 1.8620. As a responsible trader, a stop loss order will be placed above 1.8720. An order to book profit will also be placed at 1.8430.

From a suitable binary broker listed here, we may buy a put option valid until September 30th. A strike price of about 1.8620 is preferred for the trade.

In the beginning of September, lower than expected trade deficit enabled the Canadian dollar to rally against the New Zealand