One of the currencies which was least impacted by the victory of Trump in the US election is the Australian dollar. The Aussie continues to remain rock solid against the Greenback.

The currency has also gained most of the lost ground against other safe haven currencies such as the Swiss Franc. For the reasons mentioned below, most analysts believe that the Australian dollar will only consolidate and rise further in the weeks ahead.

After hitting a two year high of $79.80 per ton, the price of iron ore declined to about $70 early this week.

However, most analysts believe that there is little chance for the price of iron ore to weaken further. The primary reason for the surge in the iron ore price is the 6% decline in the domestic production in China, which is the world’s largest producer of iron ore.

The victory of Donald Trump is also aiding the price rise. Trump has repeatedly stated that he would allocate huge sums for infrastructure projects. Such a scenario would increase the demand for steel. The anticipation of an increase in the demand has created a bullish view of the commodity.

Coking coal is the second main export product of Australia. The price has more than tripled in the past one year to about $270/MT. The main reason for the rise in the price of coking coal is the decision taken by the Chinese government to restrict the number of mining days to a maximum of 276 in a year, from 330 before. The decision was taken to support the restructuring process in the coal industry. The analysts believe that it may take a while for the spot prices to cool down and align with the fundamentals. Till then the Australian exporters are expected to reap a bonanza.

On the contrary, the Switzerland National Bank continues to intervene in the market to ensure that the Franc does not strengthen further. This is done with a view to keep the exports competitive. Moreover, the victory of Trump has removed considerable uncertainty from the market. The rise in the investors’ confidence is expected to weaken the Franc, which is primarily considered as a safe haven currency. Thus, fundamentally, we anticipate the AUD/CHF pair to remain bullish in the short-term.

The AUD/CHF pair is moving within an ascending channel, as shown in the chart below. The price chart shows that the pair has a firm support (S1) at 0.7400 levels. The rising accumulation indicator shows that the investors continue to hold a bullish view of the AUD/CHF pair. Thus, we can anticipate the pair to resume its uptrend soon.

Based on the analysis, a currency trader can take a long position in the AUD/CHF pair near the S1 level. As a precautionary measure, a stop loss order can be placed 100 pips below the lower band of the channel. The long position can be sold at about 0.7570. 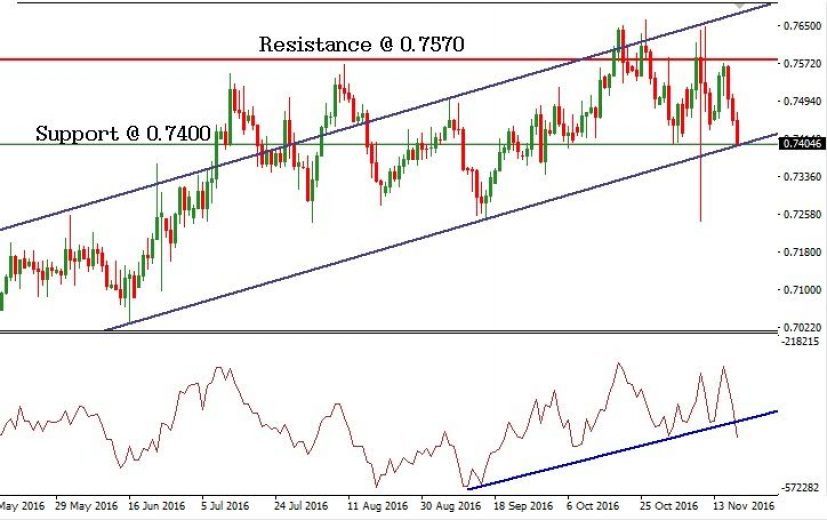 The most appropriate trade in the current scenario would be the purchase of a one touch call option from a reliable binary broker. The trader can choose a strike price of 0.7550 or lower. An expiry date around Christmas can be selected for the call option.

In mid-May, the Brazilian Rial plunged against the Greenback when a local newspaper reported that President Michel Temer asked Joesley