The weak US employment report and the postponed Fed rate hike indirectly supported the rise of the Euro dollar against the major currencies, including the British Pound, for the most part of September.

However, traders know that unless a currency is supported by strong fundamentals, it would likely fall again. Such is the state of the Euro dollar, which lacks support from investors due to a multitude of issues faced by the Euro zone countries. The past week saw another negative development which rattled the equity markets. Our discussion below explains why this could now create a steep downtrend in the EUR/GBP pair.

The Euro zone is struggling to cope up with the economic issues. The core inflation rate in September was a mere 0.8%, while the seasonally adjusted unemployment rate was 10.1% in August. The zero percent benchmark interest rate has already made it difficult for the banks and financial institutions to generate profit. As if this was not enough, the $14 billion fine slapped by the US Department of Justice on the Deutsche bank, for irregularities related to the trading of mortgage-backed securities, has aggravated the problems. The bank has already lost 50% of its market capitalization. This has raised a question regarding the ability of the bank to absorb losses.

The analysts believe that if the German lawmakers do not come to the rescue of the bank at the earliest, then the situation may go out of control and affect the entire Euro banking system. Ultimately, the Euro zone economy will decline further and trigger a chain reaction that will finally engulf the entire global economy. Thus, until the German government interferes, the Euro dollar is expected to remain weak.

While the Deutsche bank saga was going on, the market received good news about the UK’s economy. The UK’s Office for National Statistics reported that the country’s current account deficit from April through June was £28.7 billion. The reported deficit was lower than the market’s deficit expectation of £30.5 billion.

Likewise, the Office for National Statistics pegged the UK’s final Q2 GDP growth rate at 0.7%. The reported rate was 0.1% higher than the second estimate published on August 26th . The above discussed details indicate that the Pound would remain bullish against the Euro in the near-term future.

Technically, the chart indicates that the EUR/GBP pair has support from the investors and speculators at 0.8420. Likewise, the historic chart indicates that the sellers prefer to offload the long position or create a short position at 0.8660 levels. The stochastic oscillator has entered the bearish zone, after failing to cross the reading of 50. Thus, we can expect a EUR/GBP pair to undergo a steep decline. 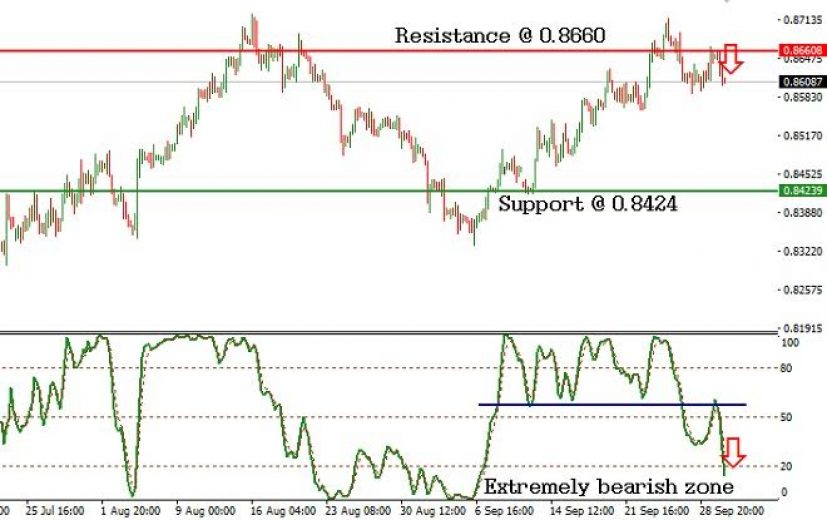 A currency trader can go short near 0.8660 to benefit from the downtrend. To keep the losses under control, a stop loss order can be placed above 0.8750. The short position can be winded when the currency pair slides to about 0.8420.

Binary traders can look at the possibility of purchasing a one touch put option to realize a return of up to 85% offered by some of the reputed binary brokers. The trader should select a target level greater than 0.8420 for the recommended trade. Likewise, the put option should remain valid till the end of October so that it gives enough time for the EUR/GBP pair to decline and violate the target level.

Since the beginning of June, the Pound is in a clear downtrend against its G10 rivals. The prime reason for