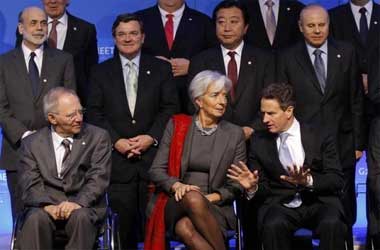 Finance ministers of the most developed economies of the world will meet this week in Germany to discuss the various challenges related to global economic growth and inflationary pressure. The economic problems of Greece and its survival in the European Union (EU) will also be discussed.

With the negotiations between Greece and the rest of the euro area at an impasse, an impatient German Chancellor Merkel has warned that an agreement must be reached before the end of the month.

Greece will be unable to pay the amount due to the International Monetary Fund (IMF) on June 5 if foreign lenders refuse to come to its rescue and supply financial aid. Analysts are of the opinion that Greece’s financial problems are so serious that only financial assistance can pull the country out of bankruptcy.

Last week, Francois Hollande (President of France) and Angela Merkel (Chancellor of Germany), organized a talk with Alexi Tsipras, the prime minister of Greece, in the hopes of finding a solution to the country’s debt problem.

Those keeping a close watch on market trends are now looking up to the US as industry has been declining again in China and business has been falling in the EU countries.

However, a preliminary poll conducted by Reuters last week showed that GDP figures in the US during the first quarter will decline following an adjustment and will display a contraction of 0.7 percent for Q1 of 2015. Joseph LaVorgna, Deutsche Bank’s chief US economist, said:

The poor Q1 2015 performance follows growth of just 2.2% in Q4 2014, so there has been very little growth over the last couple of quarters. As a result, market participants have started to wonder again whether the US economy might be in an extended period of secular stagnation.

On the other hand, the revised GDP figures of Britain indicate that the country has grown by 0.4 percent, better than initial estimates. India’s GDP figures will be published on Friday and economists have already predicted that the country’s economy has expanded by 7.4% in the first quarter.