The Mexican Peso has been on a tear for the past six months, against the US dollar. With an appreciation of about 20%, the Peso has been the best performing currency so far in 2017.

The Bank of Mexico’s aggressive monetary policy and less corrosive rhetoric of Trump helped the Peso to rally against the Greenback. Even after the US Fed rate hike announced on Wednesday, we expect the Peso to strengthen due to reasons mentioned below.

As anticipated the US Fed announced a rate hike of 25 basis points on Wednesday. The statement accompanying the second rate hike of 2017 was bearish as it highlighted weak inflationary pressures.

The Fed also lowered its FY17 headline inflation outlook to 1.6%, from 1.9% forecasted in March. Core inflation is now expected to be 1.7%, from 1.9% issued earlier.

The central bank also divulged its plan to reduce the balance sheet, which has expanded to $4.5 trillion, following the 2008 financial crisis. The Fed stated that sometime in 2017, it will begin offloading $6 billion worth assets (bonds, etc.) per month. The cap level would then be increased by $6 billion every quarter, until it reaches $30 billion per month. The process would continue until the balance sheet is reduced to $2 trillion – $2.5 trillion.

Earlier on Wednesday, the Bureau of Labor Statistics reported a 0.1% decline in the consumer prices in May, compared to a 0.2% increase in the previous month. The latest figures were below analysts’ expectations of a 0.2% growth. Similarly, the US retail sales dipped to its sixteen month low in May, according to the Census Bureau. The core retail sales declined 0.3%, versus analysts expectations of a 0.2% increase. Contrastingly, in April, the retail sales grew 0.3%.

In Mexico, the consumer prices increased 6.16% y-o-y in May, up from 5.82% in the prior month, and slightly above market’s expectations of 6.15%. Likewise, the unemployment rate declined to 3.5% in April, from 3.8% a year ago. The country also posted a trade surplus of $617 million in April, compared with a trade deficit of $2.11 billion in the same period last year. The surplus came as a result of strong first-quarter GDP growth of 2.8% on y-o-y basis. Thus, strong economic data from Mexico and weak inflation outlook by the US Federal Reserve is expected to keep the USD/MXN pair bearish. 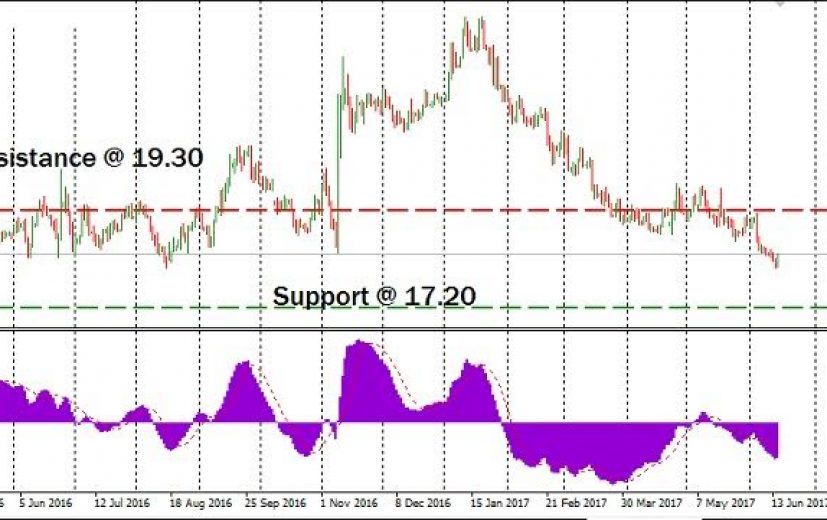 The USD/MXN pair faces resistance at 19.30. Technically, a bearish momentum is indicated by the MACD indicator, which is moving below the zero line. Thus, we can expect the pair to decline and reach the next major support at 17.20.

In the beginning of September, lower than expected trade deficit enabled the Canadian dollar to rally against the New Zealand

The bullish rally in the CAD/JPY pair bolstered the exchange rate by 400 pips to 79.60 in a matter of