Euro to weaken on decline in business sentiment

The US dollar is once again gaining strength against most of the major currencies, as the market speculates on a Fed rate hike in June. Naturally, the Euro, which moves in the opposite direction to the US dollar, is the prime target for short sellers at this point in time.

The Euro has gained considerably in the recent past against several major currencies, including the Australian dollar. The rate cut announced by the Reserve Bank of Australia also favored the rise of the Euro from 1.4439 to 1.5650 in less than two months time. Now, a series of weak economic data and the Fed rate hike speculation threatens to reverse the trend in the EURAUD pair.

On Monday, the Euro zone manufacturing PMI reading (May) was reported to be 51.5. The reading fell short of both analysts’ estimates and April’s reading of 51.9 and 51.7 respectively. In fact, the French Flash manufacturing PMI, with a reading of 48.3, reflected a contraction in the economic activity.

Similarly, the German ZEW economic sentiment reading of 6.4 was almost half of what it was in May. The reading, which reflects the business confidence, was 11.4 in April. The analysts were expecting a reading of at least 12.1 this time.

The ZEW Centre for Economic Research also announced a decline in the Euro zone economic sentiment reading to 16.8 in May, compared to a reading of 21.5 in April. The consensus of analysts was a reading of 23.4.

On a seasonally adjusted basis, the number of people employed rose by 10,800 in April. Thus, fundamentally, the EURAUD is poised for a downtrend.

The EURAUD currency pair is currently trading near the major resistance of 1.5610. The stochastic indicator reflects an overbought scenario. Thus, there exists a high probability of a decline in the EURAUD pair. 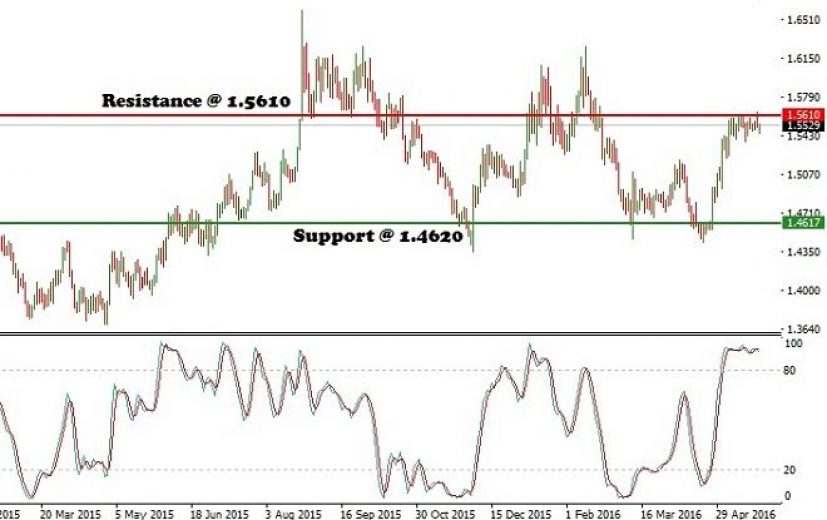 So, a forex trader should go short near 1.5600 levels. A stop loss order can be placed 200 pips above the entry price. The short position can be closed near 1.4650. The trade carries an impressive risk to reward ratio of 1:5.

Both Canada and Mexico are commodity based economies. Mexico has the world’s largest reserves of silver and stands tenth in

The exceptional manufacturing PMI reading of 56.9, reported earlier this month by the UK Office for National Statistics, propelled the