The poor US economic data (lower than expected core retail sales and Producer Price Index (PPI) reading) reported at the beginning of August indirectly assisted the Euro to conquer a portion of the lost territory against the commodity based currencies such as the New Zealand dollar.

The Reserve Bank of New Zealand’s (RBNZ) decision to slash the benchmark interest rate to a historic low of 2% also fuelled the rise of the EUR/NZD pair.

However, uncertainty in the Europe, lack of confidence among investors, and speculation of a looming Fed rate hike pushed back the Euro to 1.5290 in the beginning of September. In the short-term, there seems to be little chance for the EUR/NZD pair to rise this time due to the details given below.

The mid-August dairy auction in New Zealand saw a steep 12.7% rise in the dairy prices. The price of whole milk powder increased 18.9% to $2695 per ton. For break-even, the farmer’s require at least $3000 per ton or $5kg/ms for dairy products. The projected price of $4.25 kg/ms for the current season is still lower than the break-even price. However, it is still better than the average price of $3.90 kg/ms paid during the last season.

The spike in the dairy prices has brought back the much needed confidence among the farmers. A survey among farmers indicated that a net 3% of them have an optimistic view on the farming sector over the next 12-months. Since dairy exports contribute to the majority of the export revenue of New Zealand, the current scenario is expected to keep the Kiwi currency stronger.

In the Euro zone, the Producer Price Index (PPI) reading recorded dismal growth of 0.1% m-o-m in July, but managed to meet the analysts’ expectations. In June, the Euro zone recorded 0.8% m-o-m increase in the producer prices. Likewise, the inflation rate increased 0.2% m-o-m in August and below the analysts’ expectation of a 0.3% rise. The sluggishness in the economy is expected to keep the Euro dollar weak against the New Zealand dollar.

Technically, the EUR/NZD pair has broken below the support of 1.5430. On the downside, the next support (S1) exists at 1.4930. After failing to pierce into the bullish zone, the stochastic indicator is descending once again. The currency pair is also moving within the descending channel. Thus, we can anticipate the EUR/NZD pair to reach the S1 level. 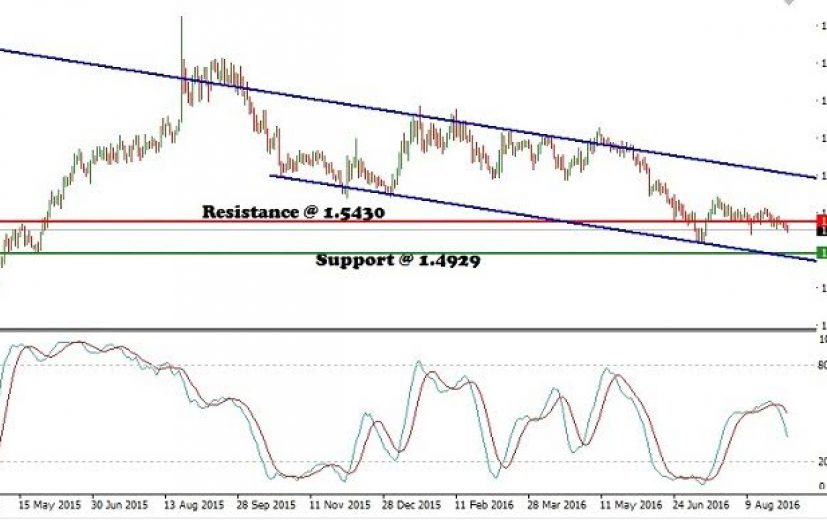 To benefit from the downtrend, a Forex trader can go short in the EUR/NZD currency pair near 1.5430. To protect the account from unanticipated volatility, a stop loss order can be placed above 1.5650. The short position can be diluted when the EUR/NZD declines to 1.4980.