Low crude prices and sanctions against Russia for the latter’s interference in Ukraine enabled the EURRUB to hit a historical high of 95.5310.

However, the recovery in the price of crude enabled the Russian Ruble to strengthen against the EUR. The EURRUB declined to a low of 75.8282 on Thursday of last week. The ECB’s head Mario Draghi’s announcement of probable end to rate cuts saw the EURRUB climbing up once again to 79-levels in the last trading day of the past week. Still, trading community does not expect the EURRUB uptrend to last for long because of the following reasons.

Firstly, the European Central bank reduced the main interest rate from 0.05% to 0%. Secondly, the effective marginal lending interest rate was decreased to 0.25%. Thirdly, the deposit interest rates were decreased to -0.40%. This translates to a 10 basis point decline. Fourthly, the monthly asset purchases under the quantitative easing program were increased to Euro 80 billion, effective April, 2016.

Fifthly, Euro-denominated bonds issued by non-banking financial institutions in the Euro zone were included in the list of eligible assets for purchases. Finally, beginning June, 2016, four long-term refinancing operations (TLTRO II) with four year maturity period will be started. Thus, considering these actions, we can expect the EURRUB to start declining further very soon. The uptrend seen presently is more of a knee jerk reaction to the statement of Mario Draghi and not a reflection of the actual scenario that exists in Europe.

The stimulus measures announced in December hardly managed to boost inflation. The ECB now expects inflation to be about 0.1% in 2016. The forecast is considerably lower than the estimate of 1% announced previously.

Draghi only stated that there will be no requirement for further easing. However, he categorically said that low interest rates will continue to prevail for the long-term. On the other hand, the price of crude oil is not expected to return to $25 level any time soon. Similarly, the iron ore price, which jumped 19% in a single day last week, is expected to remain above $50 at least as of now. All these factors, including the rise of platinum above $1000 per ounce, indicates that the Ruble is about to get stronger in the coming weeks.

Technically, the EURRUB daily chart shows a double top formation with major resistance at 83.40. Long-term support exists at 71 levels. The RSI reading of 40 indicates that the currency pair is currently bearish. 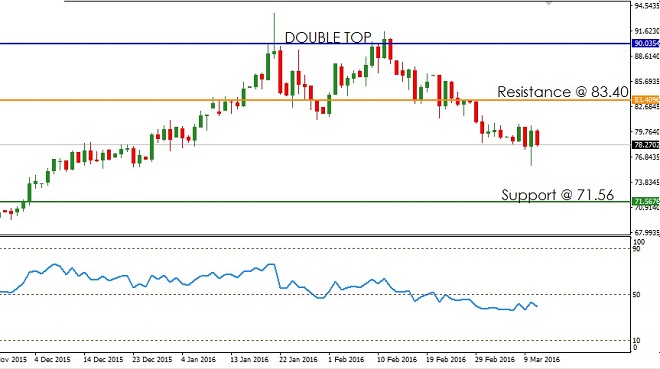 Thus, a currency trader should take a short position at the current levels. The stop loss for the short position would be 81.50. The take profit level is 72.

A one touch put option trade would be ideal in this scenario as far as a binary options trader is concerned. The expiry date of the contract should be preferably mid-April. Any strike price near the 71 level would work well for the suggested trade.