The victory of Emmanuel Macron in the French election and improvement in the Euro zone economy continues to strengthen the Euro dollar against its rival currencies. One of the worst performing currencies against the Euro is the Japanese Yen. Since the beginning of May, the EUR/JPY had strengthened from 121.40 to 130.50. We expect the EUR/JPY pair to rally further due to reasons provided underneath.

After a gap of three years, Greece was able to tap global funding by issuing five-year bonds worth €3 billion. Even though the amount raised was not quite significant and less than 1% of the total debt of Greece, still, it indicates a change in investor sentiment towards Greece and the Euro zone in general. The successful bond issue has alleviated concerns over the €86 billion international bail out, which expires in August next year.

Having tested the waters successfully, Greece is planning to come out with two more issues next year. The Bank of Japan, on the contrary, is struggling to achieve its inflation target of 2% as evident from the recent statement that followed the monetary policy meeting. The central bank postponed the time for achieving the inflation objective to sometime in 2019. It is the sixth postponement after Karuda took over as the governor. The bank also slashed its inflation outlook for 2017 and 2018.

Notably, the minutes of the meeting indicated that the members of the policy setting committee were divided over the disclosure of stimulus exit strategy. Furthermore the currency has lost sheen as most of the central banks have turned hawkish. The Fed rate hikes have also turned the investors away from the Yen, as Greenback has become more attractive as a carry trade currency. Thus, fundamentally, the Euro is expected to continue with its uptrend against the Yen in the short-term.

The EUR/JPY pair is rising after consolidating between 129 and 130 levels. Both MACD and momentum indicator confirms that the uptrend is intact. Thus, we can expect the EUR/JPY pair to move up and reach the next resistance level of 131.10. 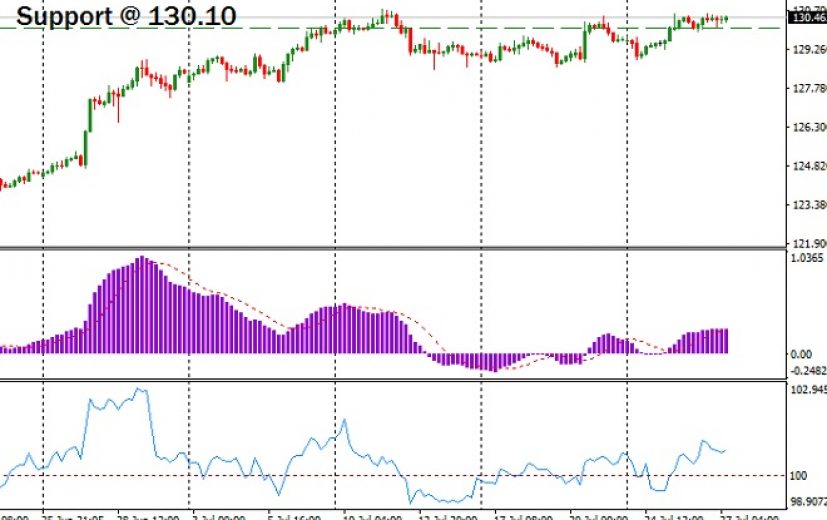 By opening a long position in the currency cross near 129.80, with a stop loss order below 128.80, we wish to benefit from the impending rally. The take profit order would be placed at 131.80 levels.

In binary market, we wish to invest in a call option contract valid for a period of seven trading days. A strike price of about 129.80 seems to be ideal for the intended trade.