Weak inflationary pressure in the US continues to keep the Greenback subdued against its rivals for the past five months. In particular, the US dollar’s poor performance against the Euro is noteworthy.

Even those analysts who had predicted a rally in the EUR/USD pair did not expect the Euro to move up this far. From 1.0600 levels, the EUR/USD pair has risen to 1.1850 levels in a matter of five months.

While there are speculators who believe that the Euro has peaked against the US dollar, there are signs of an extension to the current rally as explained below.

Even though the US regulators believe that the inflation would normalize soon, there are no concrete indications of the same. Additionally, the tensions between the US and North Korea has only subsided temporarily. Furthermore, the declining approval rating of President Trump has complicated matters related to the debt ceiling debate to be conducted in September. In the Euro zone, upcoming events support a further rise of the Euro.

The ECB is widely expected to begin tapering of its bond purchase program in December. JP Morgan anticipates the ECB to trim down asset purchases to €40 billion for three months, beginning in December. Any announcement regarding tapering would enable the Euro to consolidate against the US dollar.

An improvement in the Euro zone economy was once again confirmed by IHS Markit’s PMI data reported on Wednesday. The flash manufacturing PMI reading increased to 57.4 in August, as against 56.6 in July, and higher than analysts anticipation of 56.3. However, the US new home sales data, reported later that day, was not impressive.

According to the Census Bureau, new home sales declined 9.4% to 571,000 units in July, from 630,000 units in the earlier month. Economists had anticipated the new home sales to increase 0.3% to 611,000 units. It was the largest percentage drop since August 2016. The seven-month low figures have raised concerns about the possibility of another Fed rate hike in 2017.

The historic price chart reveals firm support for the EUR/USD pair at 1.1780. The stochastic RSI indicator is also making higher lows, while the pair is trading above its 50-period exponential moving average. Thus, on the basis of strong support and underlying bullishness, we predict the EUR/USD pair to move up further. 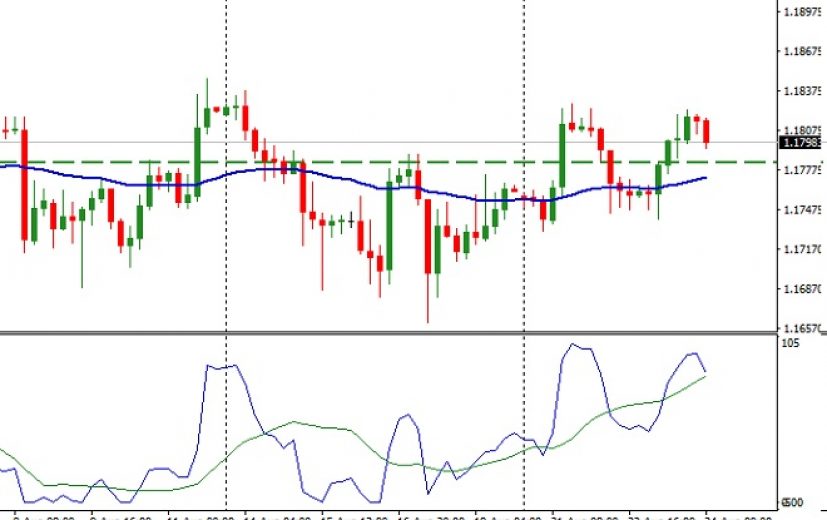 Likewise, a call option seems to be the best contract to generate profit from the predicted upswing. An entry near 1.1780 and an option expiration date around September 3rd are the two most important factors, which we would look for while entering the trade.