Tensions between North Korea and the US sparked a meltdown in the global financial markets during the past two weeks.

As investors went after safe haven assets, the Yen gained strength against its major rivals, including the Australian dollar, which is a commodity currency. Since August 1st , the AUD/JPY pair had lost nearly 300 pips to trade at 85 levels. We forecast the AUD/JPY pair to decline further due to reasons given below.

Last week, the Australian Bureau of Statistics stated that the economy added 27,900 jobs in July, up from 20,000 jobs reported in the previous month.

Analysts had estimated an addition of 19,800 jobs. While the headline figures look impressive, the detailed report reveals some important issues. Full-time employment has fallen by 20,300 and only part-time employment increased by 48,200. The unemployment decreased only by 1,800. Thus, the figures are not expected to have a notable positive effect on the Aussie.

According to the Japanese Ministry of Finance, trade surplus increased to Yen 0.34 trillion in July, from Yen 0.09 trillion in June and above the Street estimates of Yen 0.20 trillion. Likewise, the Ministry of Economy, Trade, and Industry reported a 2.2% m-o-m increase in industrial production in June, versus 1.6% anticipated by analysts. In May, the revised industrial production data showed a 1.6% increase in the economic activity.

Currency strategists at HSBC are of the opinion that traders are driven by the myth that all the G10 central banks are moving towards normalization of interest rates. Furthermore, analysts warn that such an expectation may never happen at all. The argument is based on the fact that the domestic market is not even pricing a 50% chance of a rate hike in Q2 2018. Thus, the pricing discrepancy between the rates and currency market indicate that the Aussie is currently overvalued. Notably, the minutes of the recent policy meeting show that the RBA is concerned about the growing household debt in a low-inflation environment. Thus, a possibility of a rate hike is negligible at this point in time. So, the overvalued Aussie is expected to decline against the Yen, which is driven by strong economic data.

The AUD/JPY pair faces resistance at 86.80, as shown in the image below. Furthermore, the stochastic oscillator is declining towards the bearish zone. The currency cross continues to move beneath the descending trend line. Thus, a downtrend is forecast in the AUD/JPY pair. 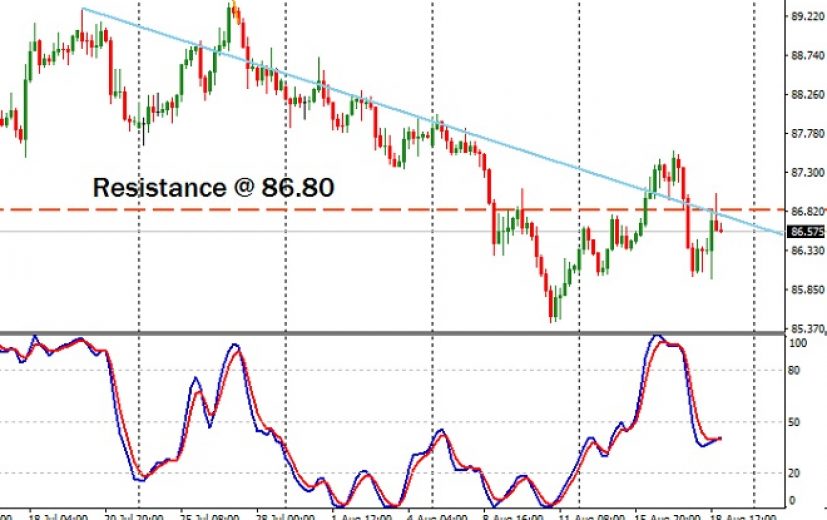 In the spot currency market, we are planning to open a short position near 86.60, with a stop loss order above 87.40. An order to book profit would be placed near 85.20 levels. Likewise, we may also purchase a put option to realize higher returns from the analysis. A strike price of about 86.60 and an option expiration date around August 29th looks ideal for the trade.